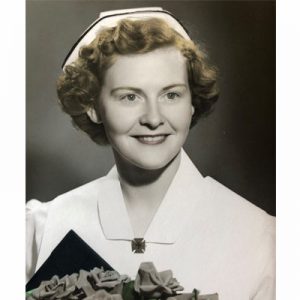 It is with deep sadness that we announce that Thelma Jean Anderson has gone to be with her Lord and Savior on February 17, 2019 at the age of 89.  She was residing at Orchard Manor, Kelowna, where she received outstanding care from nurses and care aides. Jean was born November 20, 1929 into the Roy and Irene Vanstone family of Lang, Saskatchewan – one of five siblings. Following her youth on the family farm, she pursued nursing studies at the General Hospital in Regina, Saskatchewan. In 1954, she married the love of her life, Eldon George Anderson, with whom she shared 59 years of marriage, until his passing in 2014. In 1962 and 1964 Jean had two daughters, Tanya Joy and Carmel Rea. Jean will be fondly remembered as a loving mother and a champion of causes for the betterment of others in her community. She was an OR nurse and public educator with the Heart and Stroke Foundation for many years, a Returning Officer in elections, and together with her husband, supported many social welfare initiatives including founding the first food bank in Saskatchewan. In 1998 Eldon & Jean moved to Kelowna for a warmer climate and to be close to their youngest daughter and her family, as well as Jean’s beloved sister Bernice Sebastian and family. Jean will be greatly missed by Tanya Humphries of Winnipeg and her husband Shaun, grandchildren Hannah, Avery, Joshua and Paul, as well as her other daughter, Carmel Anderson of Kelowna and husband Colin Comfort, grandchildren Shelanne, Keira and Joel. A Memorial Service will be held at 4:00 pm on Saturday, February 23, 2019 at Springfield Funeral Home, 2020 Springfield Road, Kelowna, BC. In lieu of flowers, memorial donations may be made to Central Okanagan Community Food Bank – 2310 Enterprise Way, Kelowna, BC, V1X 4H7 (www.cofoodbank.com/donate/).


The service for ANDERSON, Jean is scheduled for Saturday, February 23, 2019 at 4:00 pm. Below you will find the map for the service location and the contact information should you have any questions.