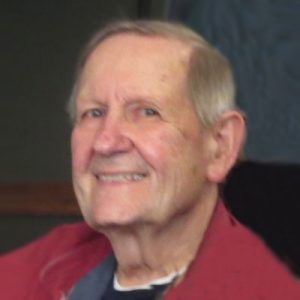 Walter Barnick was born and raised in Toronto, ON.  He worked at a variety of farm jobs during his high school and vocational school years.  This coincided with the war years when working was a necessity.

When he was ten years old, he met his future wife, Violet, at the local skating rink.  They were married for 67 years!

After graduating from auto mechanics, he apprenticed at Mack Trucks.  He was fond of telling us his instructor said nothing on a Mack Truck smoked except the driver.

Later, he drove a Mack pop delivery truck on a country route.  He often entertained us with stories of how he would race the competing drivers to the next town trying to get them to spill pop cases on the corners.  This would force them to stop and clean up while he got to the next delivery ahead and got a larger order.

At Christies Bakery he worked on the Angel Food Cake Line.  This job, too, had some moments of entertainment.  According to Walter’s account, cakes mysteriously fell off the line and were scooped up for an angel cake ball fight.  Angel food cake with okie panookie icing remained one of Walter’s favorite desserts.

Walter and Violet married, in Toronto, ON on May 5, 1951.  Not long after their marriage, they traveled west with his parents and settled in Edmonton, AB where work was readily available in the newly booming oil industry.  Walter was able to get work in the company that became Texaco refinery; the fact that his father was a supervisor helped.  He first worked on plant construction where his farming tractor driving skills came in handy.  His father put him to work pulling the cement buggy, all over the site, pouring footings.  He continued to work in various departments over the next sixteen years and advanced to second class steam engineer in the powerhouse.

Tired of shift work, he took a job with Johnson Controls doing instrumentation on HVAC systems.

In 1967, a surprise arrival of a second daughter, Valerie, prompted a move from the chilly winters of Edmonton to the warmer climate of the Okanagan.  Walter and Violet bought Scotty’s Ornamental Iron.  They ran that business, successfully, for four years.  At that point they sold it.   It later grew into Northside Steel Fabricators.

Walter then approached Wightman Services and started a new career in HVAC.  With his specialty in instrumentation, he worked on almost all the commercial buildings in Kelowna.  Capping his HVAC career, he worked as a site inspector for Vinto Engineering ensuring that HVAC systems functioned as designed.

On retiring, Walter’s interests switched to studying the mysteries of life.  He and Violet traveled throughout Canada and the US to meta-physical centers.  His quest even led him to study the Greek language in an attempt to better understand some of the texts he had acquired.  This Greek influence prompted one of his favorite sayings that he was going to his “kalos thanatos”, roughly translated as a “good death”.

Walter was predeceased by his parents and brother, John, of Wisconsin USA. He is survived by his loving wife, Violet, his daughters Gail (Werner) and Valerie (Mark) and his son Steve (Helen) as well as granddaughters Taryn, Kelsey, and Heather (Tyler) and grandson Chris.   In addition to these next of kin, he is survived by a nephew, Michael (Jit), and their children Martin, Jason and Colleen.  In keeping with Walter’s wishes there will not be a service.  A private family gathering, in his honor, will be held at a later date.