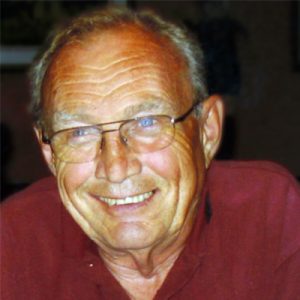 John passed away on Thursday, October 24, 2019 at the age of 84. He leaves behind his loving wife of 62 years, Betty and his 3 children Terry, Bruce (Cheryal) and Laurie (Ardith); his grandchildren Matt (Abany) and Stephen (Susan); and his great grandchildren Willa and Jaxon. He will also be fondly remembered by his sister Liz Billings; brother Nick (Loretta); cousin Marie Olechow; and his nieces, nephews, and many close friends. He was preceded in death by his mother, Margaret; father, John; sister, Margaret; brother, Joe; and aunt, Anna.

Born on May 22, 1935 in Kelowna, BC, John would help anyone in need, he had a huge heart and will always be remembered for his infectious smile. John’s first love was his family, he was so proud of all of them. He was always very happy and proud to help contribute to many community groups and he belonged to the Knights of Columbus. He enjoyed fishing, boating, camping and he loved to watch the birds from his chair on his back deck, he also was an avid gardener.

He worked for many years as a meat cutter, even owning his own meat business with Betty. He ended his working career in 1995 at Western Star Trucks.

The family would like to sincerely thank all of the staff at Cottonwoods who cared for John.

A Funeral Service will be held on Monday, November 4, 2019 at 10:00 am at Immaculate Conception Church, 839 Sutherland Ave, with Father Cerlouie Jimenez officiating, a reception to follow in the church hall. If you wish to send a condolence, post photos or share a memory, please scroll down the page to the area called “Condolences”.


The service for BAUER, John Edward is scheduled for Monday, November 4, 2019 at 10:00. Below you will find the map for the service location and the contact information should you have any questions.