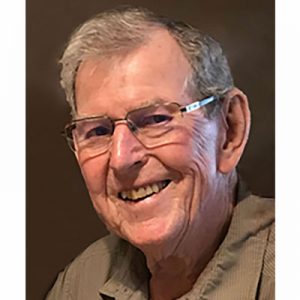 Ken was a loving husband, father, grandfather and great-grandfather. All who knew him admired his quiet strength, kindness and open heart. He had an uncanny ability to find connections with all he met.  He was an amazing raconteur with a great love of family.

Growing up in Onoway, Alberta where his father was the Station Agent, Ken graduated high school at St. Joseph’s and raised his family in Edmonton and Calgary, spending his later life in Lake Country.

He excelled as Sales Manager and General Manager at Continental Petroleum Rubber and was well respected by all his business associates. He was a man of great integrity in all things, which carried over into his work life.

In his younger years he was a very accomplished ball player, winning the Northern Alberta Jr. Championship two years in a row. All his life he swam, cycled, golfed, skated and skied in the company of his wife, Betty. Travel was a passion, as was his love of history and ancestry. His daily walks, in all seasons, carried on into his final year of life.

A Funeral Mass will be held on Saturday, October 13, 2018 at 11:00 am at St. Edward’s Catholic Church, 11123 Okanagan Centre Road East, Lake Country. A Celebration of Ken’s Life and Reception will follow in the Church Hall.

Special thanks for the excellent care provided during Dad’s stay on Unit 72 West at KGH. Also, thanks to the nurses of the Central Okanagan Palliative Home Care Program who helped make Ken’s wish to die at home possible.

Donations in lieu of flowers may be made in Ken’s name to the Heart and Stroke Foundation or the Central Okanagan Palliative Care Program, c/o KGH Foundation, 2268 Pandosy Street, Kelowna, BC V1Y 1T2.


The service for BENNETT, Kenneth Harold is scheduled for Saturday, October 13, 2018 at 11:00 am. Below you will find the map for the service location and the contact information should you have any questions.