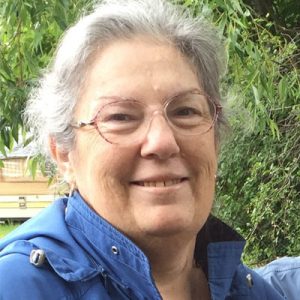 Kathi graduated from River East Collegiate in Winnipeg where she met life-long friends. During her 32-year career at Arbor Memorial, she attended many business-related courses at Red River College. Most impressively, Kathi earned her Bachelor of Arts degree by taking all of the required courses over many years of night school. Anything about or by Shakespeare was her domain. Kathi loved animals and had a long history of eccentric cats and dogs in her life.

Kathi and Joe moved to Lumby, BC and enjoyed their new life with their family of friends in the Okanagan. Kathi was a gentle soul but when faced with diabetes and its complications, she became a warrior. She did not flinch. When she finally set down her battle sword she found peace with Joe at her side.

A memorial service will be held on Tuesday, November 20, 2018 at 10:00 am at Glen Eden Funeral Home, 4477 Main Street, West St. Paul, MB.  A reception will follow interment. A Celebration of Kathi’s Life will be held Saturday, April 20, 2019 from 1-6 pm at 2331 Vale Ave, Lumby, BC. In lieu of flowers, please consider making a donation to the Canadian Diabetes Association.


The service for BRAZEAU, Kathleen Sheena (nee Mackay) is scheduled for Tuesday, November 20, 2018 at 10:00 am . Below you will find the map for the service location and the contact information should you have any questions.