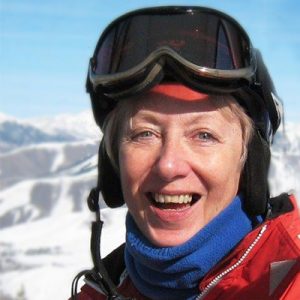 Hazel died in her 70th year at the Kelowna Hospice on July 19, 2019 after a long struggle with cancer. She is survived by her husband Ian “Cam”; brothers Bernard, Andrew, Geoff and Nigel; and many cousins, nephews and nieces.

Hazel was born in Sheffield, England in 1948 and was raised in a happy family, along with five brothers. Unfortunately, her father died when she was sixteen and Hazel left school to train as a secretary. She met Cam in 1968, and in many ways it was an unlikely match! Up to that time Hazel had shown little interest in sport or the outdoors, whereas Cam was a mountaineer who spent all of his spare time climbing. Hazel was soon joining in and found herself mixing with an older group that included some of the best climbers in the country.

Hazel and Cam moved to Canada in 1974 – Hazel came by herself to Vancouver, BC while Cam was on a three-month trip to climb in the Himalayas. She quickly got a job and an apartment, but things did not work out well for Cam. They moved to Alberta and both got well-paying jobs in a small northern oil town. Returning from Edmonton, AB, after purchasing their first set of ski equipment they were involved in a near fatal car crash which took years to recover from. They moved to Calgary, AB and then back to Vancouver.

By this time Cam was working in the fickle aerospace industry and moves were made to Dallas, Texas and then Montreal, QC, where they spent fifteen years. In Canada Hazel has worked in Shareholder Services, as a PA to two company presidents, and in Clinical Trials, she sometimes gave up a good position to follow Cam to his next assignment. For his last four years of work Cam was posted to Europe and they moved back to live in Sheffield, a few yards from the house they left all those years ago. At that time Hazel’s mother was in poor health and in a care facility nearby. Hazel could walk to visit her mother every day and was with her at the end.  Cam’s retirement brought them back to Canada where they spent fifteen happy years in the Okanagan, skiing all winter and golfing, hiking and cycling in the summer.

Hazel lived a full and happy life, had few regrets and was good at just about everything she tried. She was a very neat skier, had a beautiful golf swing, was an excellent cook and became fluent in French when she lived in Montreal. Hazel will be sorely missed by Cam and all who knew her. She will be remembered for her easy-going disposition, her generosity, her good humour, her compassion for others, and above all for her winning smile.