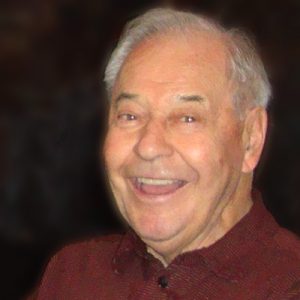 George Couldwell passed away peacefully, at 95 years of age, on August 10, 2019 in Kelowna, BC. He was predeceased by his wife of 65 years, Jane Couldwell, in June 2012; by his grandson, Todd Kirkup in April 2011; and his sons-in-law Paul MacKenzie and Jim Froggatt.  George is survived by his four daughters Pamela MacKenzie, Margo Couldwell, Sheila Froggatt, and Katherine Kirkup; grandchildren Ryan Steuart (Kristine) and Laura Kirkup; and great grandchildren Solenne Steuart and McCanna Steuart.

George was born on October 12, 1923 in Prince Albert, SK. He was raised by his parents George and Jesse Couldwell on their farm, in the Lily Plain area west of Prince Albert, SK. George attended high school at Prince Albert Collegiate Institute and then graduated from the College of Commerce at the University of Saskatchewan.

After graduation, George worked for Texaco. On August 30, 1947 he married Jane Prentice in Edmonton, AB. The couple resided in Prince Albert until 1970 when George was transferred to Regina, SK in his role as Director of Fisheries and Wildlife for the Government of Saskatchewan. In 1985, George retired from the government after a 37-year career.

George was an active member of the Rotary Club in both Prince Albert and Regina. He was also an avid golfer throughout his life. He and Jane travelled extensively throughout the world, enjoying many tours and cruises. During retirement, George and Jane spent fifteen winters at their home in Sun Lakes, Arizona.

Retirement brought George and Jane to the Okanagan. They continued to enjoy their favourite pastimes of golf and hiking. The family would like to express their gratitude to the caregivers at David Lloyd Jones home. In lieu of flowers, please make a donation to the Salvation Army, salvationarmy.ca.

A private Celebration of George’s life will be held at a later date.  If you wish to send a condolence, post photos or share a memory, please scroll down the page to the area called “Condolences”.