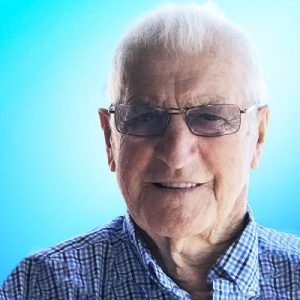 It is with deep sorrow that we announce the passing of Lorne Dobbin.  He is survived by his loving wife, Shirley and his sisters Olive, Florence, Mary and Pam; his children Bradley (Tina), Sally-Mae (Bill), Willie (Val), Barclay (Terri); and his stepdaughters Kelly (Nick) and Karen (Steve).  He was predeceased by his brothers, Clifford and Frank, and his sister, Doreen.   He passed away peacefully at the Kelowna Hospice House on June 3, 2019 after a courageous battle with cancer.

Lorne began his working career at a young age by helping out on the family farm in Westbank.  In the early 1950’s he started building roads in the East and West Kootenays.  He also did some logging until he managed to secure contracts to do roadwork throughout B.C.  His bigger projects include work on the Rogers Pass, the Bella Coola Road, Highway 97 in Summerland, and the Coquihalla Highway.

Lorne has always cherished his time at his shop in Smith Creek, accompanied by friends and his faithful dogs.  He was admired and respected by so many people, which was evident with the overwhelming support he received during the past several months.  He made an impact on everyone he met and impressed us all with his remarkable memory.

The family would like to thank the staff at the Hospice House for their excellent care, and send our special regards to Dr. Jennifer Parsons, who took the extra time to show she cared.

A Celebration of Life will be held on Saturday, June 22, 2019 at 2:00 pm at the Coast Capri Hotel, 1171 Harvey Ave, Kelowna, BC. In lieu of flowers, memorial donations may be made to the BC Cancer Agency, www.bccancer.bc.ca. If you wish to send a condolence, post photos or share a memory, please scroll down the page to the area called “Condolences.”

Send Condolences
Send Flowers or a Sympathy Card
In lieu of flowers, memorial donations may be made to the BC Cancer Agency, Link: www.bccancer.bc.ca


The service for DOBBIN, Lorne Barclay is scheduled for Saturday, June 22, 2019 at 2:00 pm. Below you will find the map for the service location and the contact information should you have any questions.