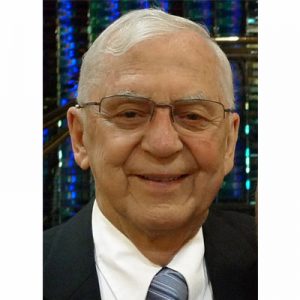 It is with profound sadness we announce the passing of Jerry William Dusik, loving husband, father and “Poppa” to his grandchildren. A gentle heart has stopped beating and a beautiful soul has gone to heaven. Jerry is survived by his loving wife of 63 years, Jolana; daughters Laurie (Bert Mueller) and Terri (Martin Sask); sons Greg (Lori Hutchinson) and James (Kate); and grandchildren Branden, Hailee, Travis and James Jr. He was sadly predeceased by infant granddaughter Shannen Sask. Jerry is also survived by his 4 brothers, Rudy (Joyce), Erv (Marilyn), Joe (Doreen) and Vick (Jude); brother-in-law Joseph Krizak; sisters-in-law Anne Augustin, Mary Betker and Jenny Krizak; and many nieces, nephews and friends.

Jerry was born in Winnipeg, Manitoba on July 6, 1930 and grew up in Oak Bluff. He received his early education in his home town, attended business college in Winnipeg and then went on to the University of Manitoba where he received his Chartered Accountant designation. Jerry articled with James Smith and Company before starting his life-long career with Revenue Canada. He retired in 1992 and was very proud of the fact he was retired for 27 years. He met the love of his life, Jolana, at a wedding in Winnipeg in 1951 prior to her moving to Ontario where she started teaching. Two years later they started dating and were married in 1955. They spent the first 2 years of their marriage in a 2-room teacherage in Rosewood, Manitoba and then moved to Winnipeg. In 1959 Jerry and Jolana moved back to Oak Bluff where they built their first house and raised their four children until they moved to BC in 1979.

During his early years, Jerry enjoyed fishing, camping, playing cards and was the original “MacGyver” who could fix anything. As a father, he loved taking extended family vacations, starting with 6 people in a small tent, before upgrading to a travel trailer and driving 5,000 miles in one month for a summer vacation in 1977. Some of the family’s best memories are of weekends at Falcon Lake and Grand Beach. Jerry’s love of travelling continued into retirement with many trips to England, Europe, Mexico, Hawaii, the mainland USA and wintering in their RV in California and Arizona. During retirement, Jerry and Jolana also stayed active square dancing in Vancouver and Kelowna. Jerry loved cruising and took the entire family on an Alaskan cruise in 2016.

Jerry was a devout Catholic, member of the Knights of Columbus, parish council member and member of Mission of the Immaculata. He, along with his friend Brian Richards, brought the Alpha program to the former Holy Spirit Church in Kelowna. He spent his lifetime volunteering to better the communities in which he lived.

Prayers will be held at 6:00 pm on Tuesday, January 8, 2019 at Immaculate Conception Catholic Church, 839 Sutherland Avenue, Kelowna, BC. The Mass of Christian Burial will follow at the church at 10:30 am on Wednesday, January 9, 2019, with Celebrant Father Cerlouie Jimenez officiating. Reception to follow immediately after the service in the Church hall.

The prayer service for DUSIK, Jerry William is scheduled for Tuesday, January 8, 2019 at 6:00 pm at located at 839 Sutherland Avenue, Kelowna, BC.


The service for DUSIK, Jerry William is scheduled for Mass of Christian Burial on Wednesday, January 9, 2019 at 10:30 am. Below you will find the map for the service location and the contact information should you have any questions.