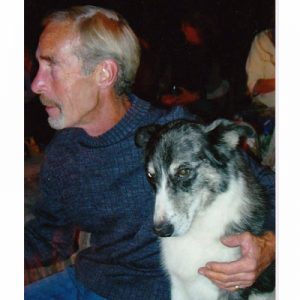 Donald passed away on December 25, 2018 at the age of 70. He is survived by his sister Susan Kruse (Peter); and nephews Michael Kruse, Mark Kruse and Robert Kruse. Don is predeceased by his parents, Dick and Barbara Ford.

Don lived a full life with a very independent life style.  He had a gift and a passion for gardening and landscaping which became very much an expression of him and this talent was appreciated by the people he worked for and the many friends who came to his various beautiful properties.  This was especially true for his Christian Valley property which he so enjoyed sharing with friends and relatives.  Don did so enjoy “entertaining”.  He was happiest working outdoors with his various dogs around him.

He was also a talented writer who loved researching and recording the Family history.  His knowledge of the Family was extensive and his writing most entertaining.  He was also an active member of the Kelowna Historical Society.

Don was a talented builder, reflected in the beautiful and unique homes on Black Mountain and in the Christian Valley.  He was an entrepreneur who co-owned a restaurant in Sorrento for a number of years, a successful “Berry Patch” on the Thomson property in the “Mission”, did community gardening and landscaping for many people in Okanagan Mission and Kelowna, and created a beautiful campground on his Christian Valley property.

His friends were numerous, his talents various, and yet he remained a very private person, so his one foray into the dramatic world in a play in Rock Creek was a surprise.  Don was never predictable.

Don was a kind and generous brother to Susan (Peter), uncle to Michael, Mark and Robert and friend of many who will miss him dearly.

Finally, we want to thank all the friends who came to visit and reminisce with him.  There will not be a service at his request, however donations to the BC Cancer Society will be appreciated.

Send Condolences
Donations in Don's name may be made to the BC Cancer Society Link: www.bccancer.bc.ca