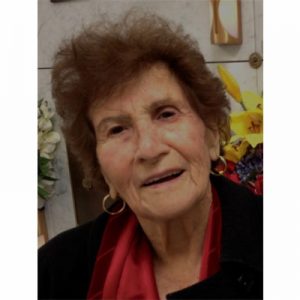 We are deeply saddened to announce the passing of our dear mother Iolanda Gaspari on October 4, 2018 at the age of 95.  She passed away peacefully with family by her side.

Iolanda was born in Teramo, Italy on December 21, 1922, and was the eldest of seven children. She was predeceased by her husband Giuseppe in 1983, and her son Michael in 2016.  Iolanda was also predeceased by her sister Filomena, brothers Giuseppe, Antonio, Romolo, and Vittorio.   She is survived by her sons Tony (Jeanne) and their children Greg (Peggy), Korey (Kerry), Lindsey (Tyler); Robert and his sons Giuseppe, Justin (Christina); Gary (Tina) and their children Joseph, Nina, and Alexandra, also by Michael’s children Natasha (Gino) and Christopher, as well as 8 great-grandchildren and Iolanda’s brother Gaetano (Antonietta).

Iolanda and her husband Giuseppe along with their first son Tony moved to Canada in 1952/53. They arrived in Yoho, B.C. where they resided for four months followed by a move to Lake Louise, residing there for 3 years before moving to Calgary.  Iolanda then moved to Kelowna after she lost her husband to be near her sons and their families.

Our family would like to thank the caregivers that have helped our mother through the years, especially Ana, Elna, Juhlie and Rena. We truly appreciate all your care and love for our mother.  We would also like to thank the Hospice House and the wonderful staff for their kindness and wonderful care.

In Lieu of flowers Memorial Donations in memory of Iolanda, may be made to the Central Okanagan Hospice Association,  1890 Cooper Rd #200, Kelowna, BC V1Y 8M1

Location
Mass of Christian burial will be held at St. Charles Garnier Church


The service for GASPARI, Iolanda is scheduled for Wednesday October 10th at 11:00 am. Below you will find the map for the service location and the contact information should you have any questions.

Mass of Christian burial will be held at St. Charles Garnier Church