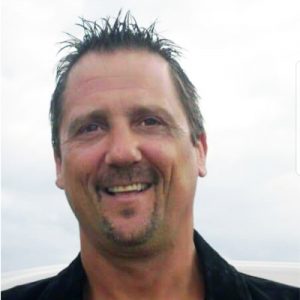 Rick passed away peacefully at the age of 56 in the Kelowna General Hospital on September 13, 2019. Very much feeling his loss are his three children Dorell Shovar, Martina Shovar, and Justin Grosso; his grandchildren Aubrey, Fox, Ava; and Martina’s Fiancé, Ava’s father, Dino, the “Coach” and player of many ball teams that Rick did scorekeeping and cheering for. Rick is also missed by his parents Charlie Grosso of Williams Lake, BC and Dolores Sheldon of Lumby, BC; his siblings, Garry Grosso of Vernon, BC and Lori Grosso of Kelowna, BC; his nephew Lynden Grosso of Kelowna BC; his nieces Becky Grosso Richardson of Williams Lake BC and Morgan Grosso Friesen of Vancouver, BC; Uncle Keith Sheldon of Florida, U.S.A.; his cousins Candice Sheldon of Ontario and Trent Sheldon of Ontario. We are grateful to Michelle Homen for being Rick’s “special lady”, touching his life with TRUE LOVE. They were both born on July 28th, true Leo’s.

Rick graduated as Class Valedictorian in 1981 at Columneetza Senior Secondary school, Williams Lake, BC He chose to complete his 5th class Power Engineering in 2004, which enabled him to make and maintain superior ice conditions with his Refrigeration Ticket.

Rick left a legacy in playing and coaching hockey. He played Junior A hockey and refereed minor hockey as well as other leagues in his capacity. He worked, played, and ran arenas in Williams Lake BC, Sparwood, BC, 100 Mile House, BC, Vanderhoof, BC, Nelson, BC, Fernie BC, and Kelowna, BC.  He was also fondly known as a “Rink Rat”. This time was considered his “ZAMBONI DAYS” and were some of the best days of his life! Rick’s sports life also included Baseball in Invermere, BC.

He will be sadly missed by all the family, friends, and sports associations he touched with his positive attitude. He enriched his community with a caring personality.

A Celebration of Life will be held Friday, October 4, 2019 at 2:00 pm at Evangel Church, in the Fellowship Room, 3261 Gordon Dr, Kelowna, BC, at 2:00 pm. Cards or flowers would warm Rick’s heart. Any donations can be made to the Heart and Stroke Foundation, www.heartandstroke.ca, and/or Kelowna General Hospital ICU, www.kghfoundation.com. If you wish to send a condolence, post photos or share a memory, please scroll down the page to the area called “Condolences”.


The service for GROSSO, Rick is scheduled for Friday, October 4, 2019 at 2:00 pm . Below you will find the map for the service location and the contact information should you have any questions.

Evangel Church - in the Fellowship Room