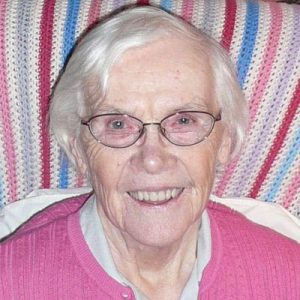 Clara passed away peacefully in her sleep on Friday, September 21st at David Lloyd Jones Home in Kelowna.  She is predeceased by her husband Joseph in 1979 and her brother, Hans in 2014.

Clara and Joseph lived and raised their children in Regina, SK. After his death, she eventually moved to Kelowna, where she resided until her death.

A special thank you to everyone who came to visit her and for the excellent, compassionate care she received at David Lloyd Jones home. As the staff often said, “She was one feisty lady”.

A memorial mass will be celebrated for her in the near future.  Donations in her memory may be made to the Alzheimer’s Society of Canada www.alzheimer.ca or a charity of choice.

Service
A memorial mass will be celebrated for her in the near future.

Send Condolences
Send Flowers or a Sympathy Card
Donations in her memory may be made to the Alzheimer's Society of Canada or a charity of choice. Link: www.alzheimer.ca


The service for HAAS, Clara is scheduled for A memorial mass will be celebrated for her in the near future.. Below you will find the map for the service location and the contact information should you have any questions.