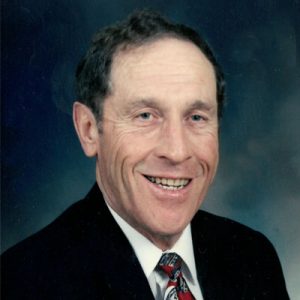 In his early life, Dad took up the saxophone and clarinet and persuaded some friends to form a group who played the Fraser Valley, in New Westminster and Harrison Hot Springs.

In his early 20’s, Dad went to work for Whonnock Lumber, starting on the green chain. He worked his way up to vice president of Whonnock Industries, manager of Holding Lumber at Adams Lake Shuswap, eventually moving up country to settle in Chase, BC and later to the Kelowna area. The company was purchased by International Forest Products of which he became a director and was involved in the acquisition of 5 more lumber mills and seven logging operations.

In the 1970’s, he purchased a 172 Cessna.  Mom and Dad had a great time exploring any place you could land a plane. Later when he got his float plane endorsement, he was able to get to the logging camps and fish the little mountain lakes. In the 1980’s, he took up skiing and tackled the interior mountains with his buddies.

After 40 years with the company, Dad retired, and it was time to play. He and Mom travelled the world, visiting over 50 countries and, as he was an avid golfer, playing at St. Andrews in Scotland was a highlight.

Dad enjoyed being with family and friends; he always made sure you were being looked after and would help you with anything that was needed.  He will be dearly missed.

Special thanks to Dr. Parsons and the staff of Mission Creek Landing who looked after Dad with consideration and loving care. Should family and friends so desire, memorial donations may be made to the ALS Society of BC, www.alsbc.ca.

A Memorial Service will be held Saturday, September 29, 2018 at 1:00 pm at Springfield Funeral Home, 2020 Springfield Rd, Kelowna, BC.  If you wish to send a condolence, post photos or share a memory, please scroll down the page to the area called “Share Your Condolences.”

Send Condolences
memorial donations may be made to the ALS Society of BC, www.alsbc.ca


The service for HENRI, Herbert Leonard is scheduled for Saturday, September 29, 2018 at 1:00 pm . Below you will find the map for the service location and the contact information should you have any questions.