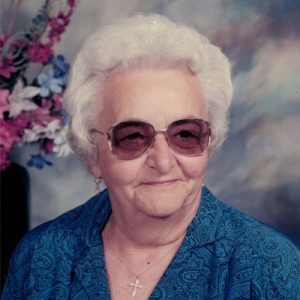 Rose passed away peacefully into the arms of her Saviour, Jesus Christ, on Thursday, September 27, 2018 at the age of 89 years.

Roselyn (Rosaline) Beyer was born the fifth of eight surviving children to German-Canadian parents Regina and Albert Beyer on June 6, 1929 at the family farm near Friedensfeld, Manitoba.  She was received into the Kingdom of God through the waters of Holy Baptism in the name of the Father and of the Son and of the Holy Spirit in the Lutheran Church on June 29.

The family later moved to a new farm at Brokenhead, Manitoba.  There they faithfully worshipped at St. Paul’s Evangelical Lutheran Church.  On the 29th of August 1943, Rose publicly professed her Christian faith through the Rite of Confirmation.

Since the Beyer home language was German, when Rose entered the local one room school she began learning English.  After Grade V, Rose was needed at home on the farm.  She also at times stayed with her older sisters to help with their children especially when new babies were arriving.

When only 15 years old she moved on her own to Winnipeg.  There she worked in a café, a fur coat factory, and as a maid for a wealthy family.  In 1946 she accompanied her parents when they moved to Haney, British Columbia.  There she met her future husband, Jack Heselton.

In the fall of 1963 Jack sought new employment opportunities in Prince George, BC and the family subsequently made their home there in January of 1964.  The family were members of Our Saviour’s Lutheran Church and all four children were confirmed there.

When Jack retired in 1980, he and Rose, along with Mike and Kathy, moved to Kelowna.  In 1985 Jack went to be with the Lord and Rose began a new stage of life as a widow.  Her youngest daughter Kathy was her faithful companion throughout this time.  In the latter years Kathy and her husband Dale were not only companions but a great blessing to her as caregivers.

Rose was a talented gardener, both flowers and vegetables; a wonderful cook, baker, and canner; gifted at needlework; and always a caring friend.  She loved having company and as often as not a meal would be offered and enjoyed by all.

As the matriarch of the family, she was loving and devoted both to her children and their spouses, and to more than a few others who called her “mom” or “gramma.”  She had a special place in her heart for her grandchildren and great-grandchildren who she adored.

In her later illness and frailty, she was graceful in suffering, always trusting in the Lord and waiting for her deliverance.

Rose had a strong faith in her Saviour Jesus Christ and was ready to “walk through the valley of the shadow of death” and so to “dwell in the house of the Lord forever.” (Psalm 23) Blessed are the dead who die in the Lord.

A memorial service will be held in the garden at Rose’s home, Saturday, October 6th at 2:00 in the afternoon. In lieu of flowers, memorial donations may be made to a charity of your choice. If you wish to send a condolence, post photos or share a memory, please scroll down the page to the area called “Share Your Condolences.”

Service
Saturday, October 6th at 2:00 in the afternoon

Send Condolences
In lieu of flowers, memorial donations may be made to a charity of your choice.


The service for HESELTON, Rose is scheduled for Saturday, October 6th at 2:00 in the afternoon. Below you will find the map for the service location and the contact information should you have any questions.