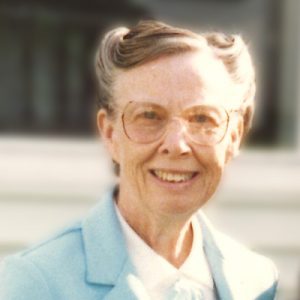 Alma Treva Hewlett was born on July 16, 1921 in Craik, SK. She was the only daughter of Cecil and Eva Lynch. Alma grew up in Stony Plain, AB with her 7 brothers: Charlie, Russell, Arnold, Albert, Lloyd, Ross and Jackie. The gospel message came to Cecil Lynch before he met Eva. Alma committed her life to God as a young girl and kept true to her vows. In about 1945, Alma travelled to Kelowna to find work in the orchards for the summer. After one season she went home to her family in Stony Plain, but she soon returned to Kelowna when she learned of a young widowed man who needed someone to care for his little girl. Alma has always claimed that she fell in love with Sharon first, and then Edwin. After Eddie and Alma were married, they had 2 sons, Brian in 1948 and Roger in 1958. They lived all their married life on the apple orchard on Pooley Rd in East Kelowna, where they had the privilege of having Union Sunday Fellowship Meeting and Wednesday Bible Studies for many years. Although Alma didn’t work outside the home, she spent her days working side by side with Eddie in the orchard and maintaining huge vegetable and flower gardens. There was always an overflow of produce that needed to be given away….and yet she kept enlarging the borders of her gardens. Alma’s brother Jackie came to live with them in 1966, and Alma cared for him right up until she was no longer able in 2018. Alma also cared for her own mother in her declining years, as well as Eddie’s brother Horace. The house was full, and the tea kettle was always on. It was no effort at all to make the table bigger and add something to the stew. Many people were recipients of Alma’s loving care over the years, as she quietly tended to those in need, whether it was personal care or just a visit to encourage. Alma moved from the farm into town in 2006, but she did not give up her gardening! When asked last summer how many of the raised flower beds at the retirement home belonged to her, she replied “9 of the 10”. Although Alma had been unable to attend meeting for several years, she enjoyed sharing a few verses of scripture or a hymn with visitors. One of the last hymns she chose while visiting with daughter in law, Shirley, was #366 – Evermore Pressing on with the Saviour.

THIS SERVICE WILL BE LIVED STREAMED TUESDAY JUNE 25 AT 9:30AM


The service for HEWLETT, Alma Treva is scheduled for Tuesday, June 25, 2019 at 9:30 am . Below you will find the map for the service location and the contact information should you have any questions.