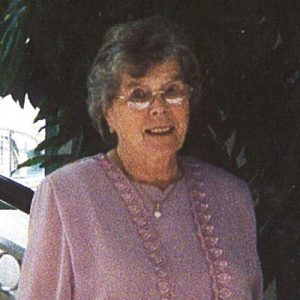 Edith Hoffman (nee Spletzer) was born on December 7th, 1925 in Essen, Germany to Angela and August Spletzer, and emigrated to Canada in 1928. The family settled first in Success, Saskatchewan. Eight years later they embarked on an arduous 350-mile journey by covered wagon to their new farm in Spruce Grove, Alberta. She met Ervin Hoffman while attending Edmonton’s Christian Training Institute. They were married in 1946 and farmed for several years in Brunkild, Manitoba before relocating to British Columbia in 1949.

Edith was an independently-minded woman well before it was the norm. She worked as a fruit packer at Kelowna’s Okanagan Packers for many years, managed her own finances, and got her driver’s license in 1957. An accomplished seamstress, she opened her own home-based business sewing fine draperies.

Musically talented, Edith played the violin, piano, accordion, and loved to sing. In her retirement she sang and toured with the Kelowna International Choir and played in the Trinity Handbell Choir.

Her faith and commitment to her church community were central pillars of her life.

Edith and Ervin were charter members of Trinity Baptist Church, where Edith served variously as the church secretary, president of the Women’s Missionary Guild, coordinator of the Scripture Memory program, and as a Sunday School teacher.

Edith and Ervin loved to gather extended family and friends together for a meal. Their doors were always open, and their epic Boxing Day brunches, where every table in the house was set end to end, were legendary.

In lieu of flowers, donations may be made to World Vision, Canada at www.donate.worldvision.ca.

THIS SERVICE WILL BE BROADCAST OR LIVESTREAMED ON TUESDAY, FEBRUARY 19, 2019 AT 1:00 PM

Send Condolences
Send Flowers or a Sympathy Card
In lieu of flowers, donations may be made to World Vision Canada. Link: www.donate.worldvision.ca


The service for HOFFMAN, Edith (nee SPLETZER) is scheduled for Tuesday, February 19, 2019 at 1:00 pm. Below you will find the map for the service location and the contact information should you have any questions.