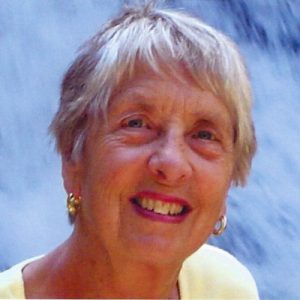 With heavy hearts, the family of Brenda Hunt (Pass) announces her tragic passing on Saturday, December 15th, 2018 at the age of 83.  Born July 20th, 1935 in Warrington, Lancashire, England, she and her parents (Walter and Clara) arrived in Canada on the Aquitania to Pier 21 in May 1949 along with her two brothers, twin Derek and older brother Gordon.  Brenda attended school in Brandon, Manitoba and, in her late teens, met Arthur Hunt.  They were married April 18th, 1955.  The Hunt family barbershop and beauty salon was operated by Brenda and Art in Brandon, with Brenda also working part-time at Reesor’s Jewelry.  Son Dennis arrived on June 29th, 1960 with daughter Diane following on April 14th, 1962. Many summers were spent at Clear Lake, Manitoba with family friends at the 2nd Street North cabin water-skiing, swimming, fishing and enjoying the outdoors.  Arthur and Brenda relocated to Kelowna, BC in May 1974.  She worked at Birk’s Jewelry in Orchard Park mall as a clerk and manager establishing many lifelong friendships.  She was well respected by the Birk’s family and an annual supper with Drummond or Henry Birk was a highlight in her year.  Following her retirement, Brenda and Art moved from their Webber Road home to Sun Village in 2004.  It was here that she continued to be actively involved in line dancing, bowling, playing cards, “coffee klatch” and traveling abroad.  Sun Village was family to Brenda and Art and many more dear friends were created.  Following Art’s death, Brenda spent numerous years traveling and enjoying the company of her “lady friends”.  In 2008, she met Raymond Pullen and the next loving chapter of her life began.  They became soulmates and were inseparable in every way.  Brenda was an outgoing, positive and friendly person who will be missed by many.  She made friends very easily and valued her family and friends dearly.  She thoroughly enjoyed the company of people and appreciated the simple things in life.  Her joyful, cheerful and kind nature will be sorely missed by all who knew her. Our individual memories of times spent with Brenda are valued and we are blessed to carry these memories in our hearts and passing on her beliefs, values and traditions to future generations.  Brenda was predeceased by her parents Walter and Clara, her twin brother Derek and older brother Gordon, husband Arthur and her daughter Diane tragically.  Left to cherish precious memories is her son Dennis (Donna) and her grandchildren Jonathan and Katherine of Brandon, Manitoba; Raymond Pullen of West Kelowna and his two sons Raymond (Natalja) and Vincent of Vancouver; as well as extended family and friends – too numerous to mention but not to be forgotten.  The service to celebrate Brenda’s life will be held at Springfield Funeral Home 2020 Springfield Road, Kelowna, BC on Wednesday, January 2nd, 2019 at 1:00 pm with a private family interment planned.  Flowers are gratefully declined.  To honour Brenda’s extreme love of animals, donations in her name may be made to the BC SPCA Kelowna Branch, 3785 Casorso Road, Kelowna, BC, www.spca.bc.ca.

Send Condolences
Send Flowers or a Sympathy Card
To honour Brenda's extreme love of animals, donations in her name may be made to the BC SPCA - Kelowna Branch, 3785 Casorso Road, Kelowna, BC V1W 4M7 Link: www.spca.bc.ca


The service for HUNT, Brenda is scheduled for Wednesday, January 2, 2019 at 1:00 pm. Below you will find the map for the service location and the contact information should you have any questions.