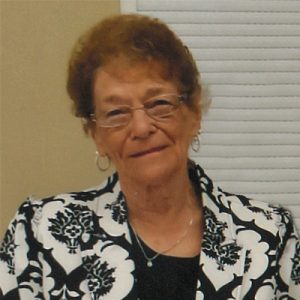 It is with great sadness that the family of Victoria Huziak announces her passing on November 16, 2019. She is survived by her loving family: her husband Tony Huziak; daughters Debbie of Moose Jaw, SK and Tracy (Colin) of Kelowna, BC; her son Melvin of Kelowna, BC; her grandchildren Mike (Stacy), Pam (Jarred), Tim (Melissa), and Jordan; her great-grandchildren Eathen, Jayce, Jesse, Madison, Alexis, and Parker; as well as her siblings Janet of Candiac, SK and Henry (Lil) of Regina, SK.

Born in Candiac, SK on February 28, 1936, and married to Tony Huziak on June 16, 1956, Victoria moved to Regina, SK and became a hairdresser. She then moved to Liberty, SK in 1968 where she helped run the Liberty Motor Hotel for 13 years. Finally, she moved to Kelowna, BC in 1981 where she was a housewife.  She spent lots of time canning and preserving the many vegetables that they grew in their garden. She was very involved at the church when it came time to make many perogies and cabbage rolls.

She will be sadly missed by all who knew her.

A Funeral Service of Divine Liturgy will be held on Friday, November 22, 2019, at 10:00 am at the Ukrainian Catholic Church, 1091 Coronation Ave, Kelowna, BC, interment to follow in Kelowna Memorial Park Cemetery.


The service for HUZIAK, Victoria is scheduled for Friday, November 22, 2019 at 10:00 am . Below you will find the map for the service location and the contact information should you have any questions.