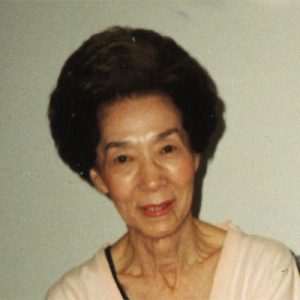 With deep sadness we announce the passing of our loving aunt and friend to all whose lives she touched.  Auntie May passed away peacefully September 1, 2019 at Mission Creek Landing Care Home at the age of 94.

May was born August 5, 1925 in Summerland, BC, grew up there and graduated from High School.  Childhood years were busy as Japanese School classes were attended after her regular school classes.  After graduation May helped out with the family farm until the early 1960’s when she then moved to Kelowna, BC and began work at Henderson Dry Cleaners.  She remained there until her retirement in 1990.  May lived with her eldest niece Mona and husband Fred until October 2016.

We would like to thank Dr.  A. Canning, Dr. W. Mackle and all her caring and wonderful staff at Mission Creek Landing for the exceptional care she received.

May was an amazing aunt, friend, and mentor and will be deeply missed.  At her request there will be no funeral service.  A private burial will take place mid-September in the Peach Orchard Cemetery, Summerland,