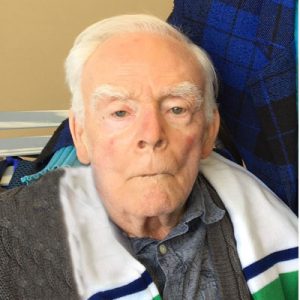 Burton was born on April 8, 1931 in Biggar Saskatchewan, the son of Gordon Ross King (Railroader) and Ellsie Rankin (School Teacher) in the middle of the Great Depression. As a young boy, seeing his dad, brother and neighbors leave to serve in WW2. After the war, he followed his dad to his first job as a bookkeeper in Churchill, Manitoba, then to the Kemano project in BC, where he met his first wife Judith Eikeland. They moved to Toronto where they had four boys, Ross Jr., Douglas, Gregory and Carlson and later, a daughter Caryn in Vancouver. Ross worked for Crown Life Insurance, First City Financial Corp. and Columbia Trust. He also built many houses on the side and most of his children are in the construction business today. Ross and his second wife June spent a long retirement together, traveling the world and later settling in Kelowna with their dog Kelly and cat Burton.

We all love you Dad.

Special thanks to all the staff at the Village at Smith Creek.

Service
At a later date


The service for KING, Burton Ross is scheduled for At a later date. Below you will find the map for the service location and the contact information should you have any questions.