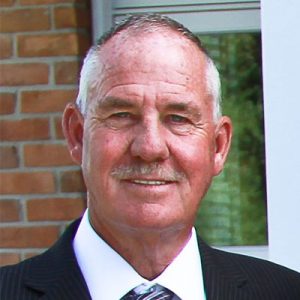 John Raymond King (“Kinger”) died peacefully with his family by his side at Kelowna General Hospital on September 17, 2018 at the age of 69. Johnny is survived by his wife Linda, children Darby (Jared) and Jamie (Shauna), grandchildren Kalia, Griffin, Aiven and Rylan, sister Jeanne Henry (Gary), nieces and nephews, and many friends that became family.
John was born in Saskatoon, SK on March 3, 1949, and throughout his life also lived in England, Calgary, Vancouver, Kelowna, El Mirage Arizona, and his true home of Castlegar, BC. John had a gift for making friends wherever he went and was always the life of the party. John married Linda in 1975 and together they raised their kids in Castlegar. John’s resiliency after losing his arm in 1996 showed his determination and competitiveness and was an inspiration for all those that knew him. John enjoyed camping, pickleball, hockey, golf and spending time with his many friends. Everyone will remember him for his quick wit, sarcasm and one-liners. Grumpa, as he was known to his grandkids, will be dearly missed for his kind heart and playful spirit. To his golf buddies, if he owes you money, he told us to tell you that you are not that good, he’s not that bad and he’s not paying.
The family would like to thank everyone for the overwhelming support they have received and would like to send a special thank you to the wonderful ICU team at the Kootenay Boundary Regional Hospital in Trail. The care and compassion that John received will never be forgotten.
A gathering for friends and family in celebration of Johnny will be held on October 27, 2018 at 3:00 pm at his beloved Castlegar Golf Club, 1602 Aaron Rd, Castlegar, BC. Should family and friends so desire, memorial donations may be made to either the Castlegar Golf Club Junior’s program or the KBRH Foundation for the ICU.
If you wish to send a condolence, post photos or share a memory, please scroll down the page to the area called “Share Your Condolences.”

Send Condolences
Should family and friends so desire, memorial donations may be made to either the Castlegar Golf Club Junior’s program or the KBRH Foundation for the ICU. Link: www.kbrhhealthfoundation.ca


The service for KING, John Raymond is scheduled for October 27, 2018 at 3:00 pm . Below you will find the map for the service location and the contact information should you have any questions.