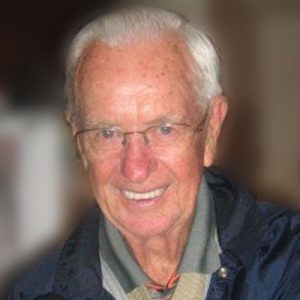 With heavy hearts we announce the passing of our beloved Dad, Jerry.

Jerry was born in Wilkie, Saskatchewan to Joseph and Elizabeth Kroschinsky and was the third child of ten. His family moved to Kelowna in 1947. In 1953, Jerry joined the Royal Canadian Air Force. He married Audrey Roe in 1959 and they had two children, Dianne and Kevin. Jerry’s career took the family from Portage La Prairie, Manitoba to Downsview, Ontario, Cold Lake, Alberta, and Comox, British Columbia. He retired from the RCAF after twenty-four years of service, and the family returned home to Kelowna. Jerry sold cars for the next eleven years at Jacobsen Pontiac Buick, then semi-retired, and loved his early mornings working at Aspen Grove Golf Course in Lake Country.

Jerry fully retired at age 64 and he and Audrey became avid snowbirds, travelling to Yuma, Arizona each winter. They met many people on their travels and had numerous dear friends. Jerry spent many days on the golf course, and in winter you could find him on the ski hill with family and friends. He enjoyed boating and family picnics at the lake, gardening, yardwork, BBQing, and watching hockey, sports and the news. Jerry made an impression with everyone who met him as such an outgoing, friendly and caring person. Family was the most important part of his life, and especially his grandchildren, whom he loved spending time with – they brought him so much joy. He was very close to his nine siblings and his treasured nieces, nephews and their families and looked forward to family gatherings.

During the last four years, Jerry and Jean deeply loved each other and embraced daily life together. They enjoyed dancing, playing cards with friends, walking, gardening, canning, road trips, watching TV and being with each other’s extended families. Their devotion to each other was obvious to all.

Jerry is survived by his loving partner Jean; daughter Dianne (Dave); grandsons Neil and Ian (Sara); son Kevin (Terri); step-grandchildren A.J. (Jordan), Jamie (Teia), Ryan and Brandon (Nikki); step great-grandchildren Jakob, Zakary, Jaxen, Ashton; his siblings Alma (Jeff), Leona (Paul), Rob (Trudy), Mick (Trish), Don (Ina) and Dave (Brenda); brother-in-law Harold; many nieces, nephews and other family whom he dearly loved. Jerry is also survived by Jean’s daughters: April (Peter), Janice (Art) and Laura and their families; and Dave’s daughters Robin (Matt) and Kelly (Matt) and their families, whose time getting to know him was all too brief. If you were important to one of Jerry’s family members, you were important to Jerry.

Jerry was predeceased by his wife of 54 years Audrey, his parents Joe and Liz, and brothers Ernie and Laddie. His youngest sister Marlaine joined him in the care of the Lord on February 14, 2019.

Thank you to the staff at KGH, Stride Physiotherapy and Cottonwoods for their care while Dad was there.

Jerry lived an amazing life and he is going to be missed so much by all. We love you!

In lieu of flowers, donations can be made to the Heart and Stroke Foundation, www.heartandstroke.ca, or the BC Children’s Hospital, www.bcchildrens.ca.

Send Condolences
Send Flowers or a Sympathy Card
In lieu of flowers, donations can be made to the Heart and Stroke Foundation or the BC Children’s Hospital. Link: www.heartandstroke.ca, www.bcchildrens.ca


The service for KROSCHINSKY, Gerald (Jerry) Leo is scheduled for Sunday, February 17, 2019 at 10:00 am. Below you will find the map for the service location and the contact information should you have any questions.