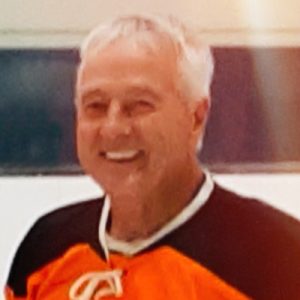 With heavy hearts, we are sad to announce the passing of Mickey (Verne) Kroschinsky. Mick died with his skates on, and so his wish was granted. Mick was born in Wilkie, Saskatchewan and moved at the age of 3 to RUTLAND, BC. He was the 7th of 10 children. Mick married Lorraine Mallach in 1965 and together had two children Mike (Evie), and Karen (Brad). Mick became the proud grandfather of his grandchildren, John, Heather, Taylor and Jayme. Mick had many treasured years with Lorraine and the Mallach family. After Lorraine passed away, Mickey was fortunate to marry the second love of his live, Trish, with whom he shared 24 wonderful years. His family expanded to include Cam (Lisa) and Elizabeth (Brad) and four more cherished grandchildren, Heath, Piper, Max and Liv. Mick also travelled to New Zealand several times to connect with his Haslam in laws.

Mickey was a skilled carpenter, orchardist, gardner and an avid outdoorsman. Mick LOVED sports. Amongst many sports teams, he was especially a proud member of the Rutland Rovers ball team for many years. Mick also shined on the badminton court, curling rinks and of course, his renewed love, on the rink playing hockey. Mick always had a sense of humor, a strong work ethic and was always known to be generous and charitable. These were the things he proudly modeled for his family and friends.

There will be a celebration of life on Saturday, October 5th at 1:00 pm at the Rutland Centennial Hall. 215 Shepherd Road, RUTLAND BC. A private family service will be held at a later date.

Condolences may be sent to the family by visiting www.springfieldfuneralhome.com.


The service for KROSCHINSKY, Mickey (Verne) is scheduled for Saturday, October 5th at 1:00 pm . Below you will find the map for the service location and the contact information should you have any questions.