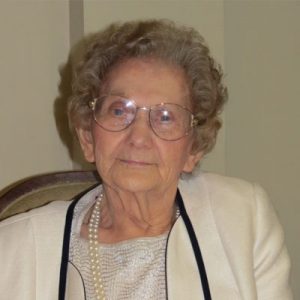 It is with deep sadness that we announce the passing of Katherine Lepp on December 11, 2018.  Katherine was born in the Rosenort area of the Ukraine to Peter and Maria Kliever, the oldest of six children.

In August 1924 Peter and Maria, with their three Russian-born children, decided to escape further hardship from bandits, revolution and starvation.  Family members who had already left Russia years previously sent care parcels to relatives back in Russia.  It was these care parcels from family in the U.S. that saved them from starvation.  Katherine was five years old at the time and remembers the many tears that were shed for loved ones who stayed behind.  The farewell song “God Be With You Till We Meet Again” was a vivid memory.  They were so thankful to leave Russia and settle in Manitoba.

Katherine grew up on the farm and went to a one-room school.  Those were hard years for her parents and food was scarce.  At the age of 12 Katherine started her first part-time job helping neighbors during the combining season.  She washed dishes, cleaned floors and helped feed the workers, earning her $1 a day, which was given to her parents to put food on the table.

One important day in her life occurred when Katherine was 12 years old.  A letter came from her Gramma Epp who admonished the older grandchildren to accept the Lord as their Savior and be ready for the return of Christ.  Even though she had heard sermons before, this letter had a great impact and she accepted Christ into her heart that night.  Katherine was baptized four years later.

In the spring of 1934 after school was closed, Katherine went to work for an uncle and aunt on their farm.  She worked hard; during harvest, her hours were 4:30 a.m. till 11:00 p.m.  Then she would return to school for the winter and early spring months.

Katherine remembers many hard years on the farm during the “dirty 30s”—some wet years and some with drought when grasshoppers ate what did survive in the fields.  They were some lean times at Christmas, but they did get some candy, nuts and a Christmas orange.  One year when times were better, Mom and her sister got an Eaton’s doll, a treasured and special gift.  A few months later the doll was broken by a cousin.

In 1936 Katherine left for the big city of Winnipeg and worked as a maid for three years followed by four years as a dietary aid in a hospital.  She worked in the hospital kitchen and was known for great yeast baking.

Katherine married Frank Lepp in 1943.  They lived in Winnipeg for five years, then left the city for the farm life about two hours southwest of Winnipeg.

Mom was very involved in the Manitou Alliance Church.  She led a women’s Bible study and did lots of visitation, taking baking to many people.

In 1992 Katherine and Frank moved to Kelowna and were involved with the Alliance Church in Kelowna.  They loved traveling and did so until 2004.

In April 2006 they moved into Missionwood Retirement Residence and enjoyed their time there immensely.  Mom was very thankful for the staff and care that she received there.  She made many friends and prayed for them and the staff.  They attended the church services held at Missionwood. In Spring 2016 Mom needed more care and temporarily moved in with her daughter and son-in-law, Rita and Bob Letkeman.  Our family appreciated the care she received in their home. Mom moved into Sutherland Hills Rest Home in August 2016.

Katherine was predeceased by her parents Peter and Maria Kliever, her husband Frank in 2009 and by a great-grandson, Wyatt Elias, in 2011.  She was the oldest of six children and the last to pass away.  Three brothers and two sisters predeceased her: Betty, Victor, Walt, Arthur and Marianne.

Mom was a woman of faith and a real prayer warrior, spending many hours praying for her children, grandchildren and great-grandchildren.  She had a huge burden for those not committed to living a life for Christ.  Her prayer was always that each of the family members will be in Heaven with her someday.

We will all miss her dearly and the Christian example she left us will live on in our hearts.  We also rejoice because we know she is in Heaven and celebrating there.

A Funeral Service will be held on Saturday, December 15, 2018 at 4:00 pm at Springfield Funeral Home, 2020 Springfield Rd, Kelowna, BC.  Interment at Kelowna Memorial Park Cemetery. If you wish to send a condolence, post photos or share a memory, please scroll down the page to the area called “Share Your Condolences.”

In lieu of flowers, memorial donations may be made to Music Mission Ukraine Canada (MMUC), Box 2401, STN A, Abbotsford, BC, V2T 4X3.

Send Condolences
Send Flowers or a Sympathy Card
In lieu of flowers, memorial donations may be made to Music Mission Ukraine Canada (MMUC), Box 2401, STN A, Abbotsford, BC, V2T 4X3.


The service for LEPP, Katherine is scheduled for Saturday, December 15, 2018 at 4:00 pm . Below you will find the map for the service location and the contact information should you have any questions.