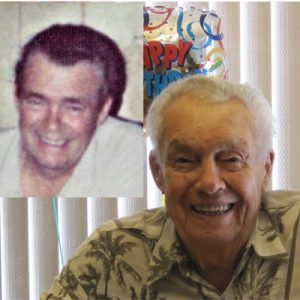 After a life well lived, it is with sadness that we announce the passing of Albert Gordon Loader at the age of 93. Al passed away at the Kelowna Hospice House on October 24, 2019. Al was born October 20, 1926 in Winnipeg to Francis and Emily Loader. He was predeceased by his first wife Joyce and brothers Frank, Tom, John, Dennis, Robert and Joe Morrisette. He will be lovingly remembered by his wife Diane; son David; daughter-in-law Barbara; grandchildren Alexandra, Marshall and Bretton; sisters Eva Green, June Shaw, Lily Tocheri; and brother Mac Morrisette.

Al loved to work and be physically active. He held jobs from the age of 15. As a young teenager, he and friends would bicycle from Winnipeg to Beausejour (90 miles return) to swim at Hobans’ Park.  He enlisted in the Army when he was 17 after his brother Tom had been killed in the war.  He trained at Shilo, Manitoba and Vernon, British Columbia with the Americans for the Pacific battles. Al recalled training all day and then running 10 miles after dinner. The war ended before he was sent overseas.

Al joined Fairbanks Morse Corporation in Winnipeg when he was 20 as a Shipper and worked his way up to Divisional Manager.  He left Fairbanks Morse when they closed down in Winnipeg, MB. They offered him a job in Calgary, AB but he chose to stay in Winnipeg. Through the connections he made while with Fairbanks Morse, Al started his own company as a Manufacturers’ Agent representing many furniture, appliance and electronics companies. Al found his niche in Sales and won many awards & trips for his success.

He married Joyce McCulloch in 1948. They had one child, David.

Al & Joyce had a cottage at Chalet Beach on Lake Winnipeg and spent most of their summer weekends there. Al enjoyed work projects, boating, fishing, hunting, barbeques, happy hours and playing cards with friends. Joyce passed away in 1989.

Al married Diane Semenko in June 1993. They retired and moved to Shuswap Lake Estates in Blind Bay, BC. Al bought a boat and thought he’d do a lot of fishing but soon found that he preferred golf. Al & Diane started travelling south in the winter for golf vacations.  In 1998 they visited friends in Mesa, Arizona. They were so impressed with the snowbird lifestyle that they bought a Park Model Home in the Good Life RV Resort and started travelling to Mesa for the winter months. While there they enjoyed golf, happy hour, shuffleboard, pool and the Saturday night dances.

Al was happiest when he had a project. When he didn’t have enough yard & garden chores he took to cooking and baking. He made dills, pickled carrots, salsa and apricot jam. He made bread in the bread machine and then graduated to baking cookies, muffins and fruit buns. He kept the freezer well stocked.

Al and Diane moved to Kelowna in 2013. They made many caring friends in the community.

The family would like to thank Dr. Goldberg (Salmon Arm), Dr. Du Plessis, Dr. Maytham, the KGH doctors and nurses, Interior Health nurses and staff at Kelowna Hospice House, for their excellent and compassionate care.

A private celebration of life will be held at David and Barbara’s home.

Those wishing to, may contribute in Al’s name to a charity of their choice.