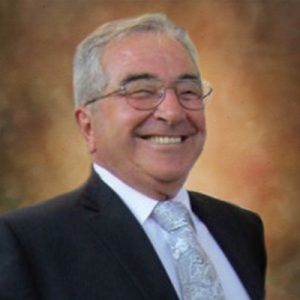 Rocco Mazza passed away November 23, 2019. Rocco was born in the town of Castelmezzano, province of Basilicata, Italy.  He moved to Rome to work as a teenager and immigrated, at the age of 27, to Canada where he lived in Saskatoon, SK for 21 years. He married and had two sons, David & Marco. He and his family moved from Saskatoon to Kelowna, BC because Rocco loved the Okanagan valley and thought it reminded him of his home in Italy.

His career included driving a truck for the Italian army, bricklayer, owning a bakery and a catering company, and in Kelowna, working in two local grocery stores as a baker.

Rocco was a long-time member of the Kelowna Italian club and visited Italy often to visit his extended Italian family. He loved a good party and was known for his humor and easygoing approach to life.

Beloved by all who knew him, his ready smile and positive attitude made him the light in every room. He lived his life to the fullest and enjoyed all that life offered: gardening, dancing, fishing, hunting, snowmobiling, chopping wood, joking around, and playing with his 4 grandkids. When you arrived at his house he could often be found in the garden, pruning his tomatoes, or watering the grapes. He loved his fruit trees and experimented with grafting and was often scolding birds for stealing his fruit. Rocco was a handy guy to have around; if he couldn’t find something he wanted, he would just make one.

He preferred to eat the food he cooked himself, and he was amazingly great at making things from scratch.  His cooking and baking will be sorely missed, especially his homemade sausage, cheese, fresh pasta, tomato sauce carefully created from tomatoes from his garden, his Torrone (Italian candy) and his infamous wine.

Rocco met Norah Slater later in his life and in their relationship they found something very special. Together they danced and laughed and enjoyed their retirement years together. Norah brought out a bit more of Rocco’s fun loving and mischievous side… including dressing up for Halloween and attending as many social gatherings and events as they could fit in. They travelled together several times, riding bikes, and walking every day. To say they were happy together was an understatement; Norah was a solid rock and comfort for Rocco through his battle with cancer.

Rocco dreamed big and often spoke with pride and love about his two sons, four grandkids and one great grandson.  Rocco believed in having fun, but lived a life based on what is truly important – staying close with family.  He lives on within those he has left behind.  Rocco is survived by his love Norah Slater; sister Maddalena Mazza Perriello Eufemia of Italy; by sons David (Denise) and Marco (Gina); four grandchildren Delaney, Sloane, Sophia, Logan; and one great grandson, Lincoln. Rocco was predeceased by his father Francesco Paolo Mazza, mother Maria Caterina (Perriello) Mazza, and brothers Giacomo Coppola and Luigi Mazza.

A service will be held on Thursday, December 5, 2019 at 10:00 am at Immaculate Conception Church, 839 Sutherland Ave, Kelowna, BC. In lieu of flowers, donations may be made to the Kelowna Canadian Italian Club, www.kelownaitalianclub.com.


The service for MAZZA, Rocco is scheduled for Thursday, December 5, 2019 at 10:00 am. Below you will find the map for the service location and the contact information should you have any questions.