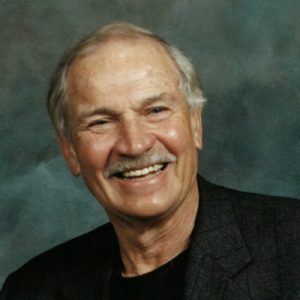 Nancy and he met playing badminton when he was managing the family hardware store in Selkirk.  Eventually he returned to school earning his CA designation where early in his career he became a partner with KPMG in Winnipeg, Vancouver and in 1980 became Managing Partner in Kelowna. John was also a trustee in bankruptcy where his kindly and caring manner was instrumental in helping distressful situations become more bearable for many.

John enjoyed life to the full; in Selkirk, where many dear friends remain, the cottage on Lake Winnipeg and loving life in Kelowna skiing at Big White, playing duplicate Bridge and golfing at Gallagher’s and Kelowna Club with his many friends. John attended church services at St. David’s Presbyterian Church where he was treasurer for many years.

He and the family enjoyed many trips together throughout their formative years and later he and Nancy experienced many various trips on land and sea. He coached his sons in hockey and never missed Jennifer’s baseball and skating performances. The family wishes to thank the many people from Interior Health who were involved in his exceptional and compassionate care while at home.

A celebration of John’s life will be held on Friday, June 28, 2019 at 1:00 pm at Springfield Funeral Home, 2020 Springfield Road, Kelowna BC with Rev. Emery Cawsey officiating. In lieu of flowers donations may be made to Sindi Ahluwalia Hawkins Cancer Center www.bccancer.bc.ca. If you wish to send a condolence, post photos or share a memory, please scroll down the page to the area called “Condolences.”

THIS SERVICE WILL BE LIVE STREAMED FRIDAY JUNE 28 AT 1:00PM

Send Condolences
Send Flowers or a Sympathy Card
In lieu of flowers donations may be made to Sindi Ahluwalia Hawkins Cancer Center Link: www.bccancer.bc.ca


The service for MORRISON, John Newton is scheduled for Friday, June 28, 2019 at 1:00 pm. Below you will find the map for the service location and the contact information should you have any questions.

The service will be a celebration of John’s life, with Rev. Emery Cawsey officiating