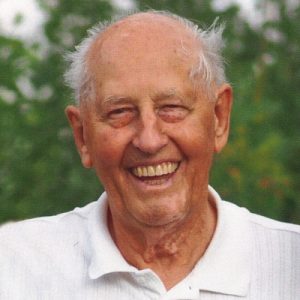 Smiley grew up in Muskoka, ON, farming the land his Swedish grandparents homesteaded on and working on the railroad. He was a devoted family man, marrying his wife, Joan, in Kapuskasing, ON, in 1953.  They had four children together, and they all moved to Kelowna, BC, in 1962. Smiley joined the Ontario Provincial Police in 1950; he was in the dry cleaning business with his wife’s family both in Kapuskasing, ON, and when they moved to Kelowna and purchased Henderson’s Cleaners; he worked with the RCMP as its Kelowna Detachment Crime Prevention Officer then as a Kelowna City councilor. He was active in skiing, golfing, and acting/singing with Kelowna Community Theater. He was a long-standing member of St. Georges Masonic Lodge (Kelowna) and St. Paul’s United Church Choir. He enjoyed many hours refereeing hockey, umpiring baseball and cheering on the Kelowna Rockets. After his retirement, he became a beekeeper, keeping us supplied with fabulous honey. Up until the moment of his death, Smiley lived his life the way he wanted.

The family wishes to thank the community and his friends for all the love, companionship, & laughter over the years. We will miss his beautiful soul in our daily lives, but we will always remember him with so much love and grace


The service for NELSON, John “Smiley” Dunn is scheduled for Monday, November 4, 2019. Below you will find the map for the service location and the contact information should you have any questions.