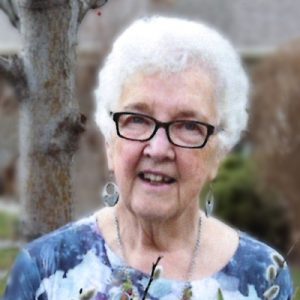 Helen died peacefully on June 25, 2019 at Pine Acres. She is survived by her two sons Ken and Pat; her 4 grandchildren Bradley, Andrew, Liam and Julian; her siblings Rene Poole, John Epp, Ruth Penninga and Carol Rempel. She was predeceased by her husband Sid, and her two brothers Vern Epp and Vic Epp.

Helen Lois Epp was born in Three Hills, Alberta to Isaac and Catharine Epp on March 17, 1941. She was their third child but their first daughter. Another brother and three sisters also came along to make a family of seven children. They moved to Kelowna, BC when she was in grade two and she lived here until graduation. She was active in school activities which included playing the viola in the orchestra, playing in a string quartet, singing in choirs and she was one of the pianists in her local church “Peoples Mission”

After graduation Helen went to nurses training in Kamloops, BC and graduated in1962. While in training she met her future husband William Sidney Rodgers and they were married March 9,1963. They had two sons, Kenneth and Patrick. Sid predeceased her in October of 2000. Sid’s job with CN Railways required them to move often. Their homes included Kamloops, Prince Rupert, Smithers, Edmonton, Calgary, and retiring to Fairmont Hot Springs. Wherever they lived Helen managed to get a job as a nurse or an Instructor of Nursing. After Sid’s death Helen moved back to Kelowna, BC where she connected with friends from the past and made many new ones. Here she involved herself with activities in her gated community, Balmoral. She enjoyed many hours playing the piano and performing with her music group, as she was a gifted pianist. She also got involved in playing cards, movie nights, darts, dinners, coffee parties, scrabble plus she attended many concerts, dramas, bus trips, and did lots of travelling across the country and beyond. Life seemed to be going well. She was surrounded by friends and family; she had an active social life, although she always missed Sid a lot! When her health failed it became necessary to move to assisted living, Chatsworth. After only six months her disease took control and she was requiring more help, so she moved yet again to a long-term care facility, Pine Acres.

A Service will be held Wednesday, July 3, 2019 at 10:00 am at Springfield Funeral Home, 2020 Springfield Road.  If you wish to send a condolence, post photos or share a memory, please scroll down the page to the area called “Condolences.”


The service for RODGERS, Helen (née Epp) is scheduled for Wednesday, July 3, 2019 at 10:00 am. Below you will find the map for the service location and the contact information should you have any questions.