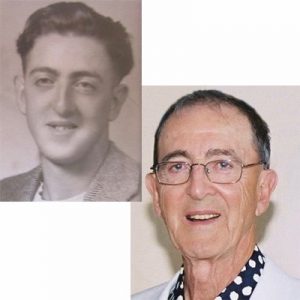 Al was born into a large Lebanese family on June 13th, 1924 in Rush Lake, Saskatchewan. Growing up, he helped out on his family’s farm, but at the age of 17, he struck out on his own working on the C.P.R. Telegraph Crew in Northern Saskatchewan and followed that with a stint as a traveling salesman. When he discovered Kelowna, he thought he’d found a little piece of heaven. He convinced his Mother and Father, and several siblings to leave the prairies and move to BC. Realizing his knack for business, he opened his own school supply store in Kelowna, a 5-to-a-dollar store in Quesnel, and a bowling alley in Summerland. These first three businesses set the stage for his successful career in Real Estate, which would continue for over 35 years. During that time, he thoroughly enjoyed all aspects of real estate in the Okanagan Valley.

With his uncanny ability to talk to anyone, a light-hearted temperament, and an easy smile, Al excelled at his work. In 1961, he created Okanagan Realty Ltd., with many outstanding salespeople, and won several awards for outstanding achievements in his field. Kind and generous, he engaged in charity work through his involvement in the local Shriners and Masons. He was also very active in the United Church.

An enthusiastic singer, and dancer, Al liked to stay active, and was always up for discovering the latest trend in healthy living. His retirement offered more time for globetrotting to over 38 countries, tennis, golf, square dancing, and 39 winters in the Arizona desert with his wife. One of the highlights of those days came when he made a “hole-in-one” during a golf tournament at the Kelowna Golf and Country Club!

A true lover of all that life had to offer, Al was always ready with a joke to tell, or a story to share. He loved his family, the Okanagan, and touched the hearts of so many over the years. He was much loved, and his memories will live on with all those who knew him. A Celebration of Life will take place in Kelowna in June. In lieu of flowers, please consider honoring Al with a donation to the Shriners of BC www.bcshriners.com/donate-now.

Send Condolences
Send Flowers or a Sympathy Card
In lieu of flowers, please consider honoring Al with a donation to the Shriners of BC Link: www.bcshriners.com/donate-now