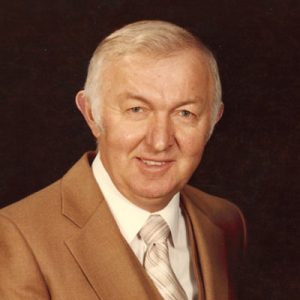 Reinhard “Ron/Opa” Schaffrick passed away peacefully at Lake Country Lodge, B.C. on June 13, 2019 at the age of 91.  Reinhard was born on January 2, 1928 in Piotrkowek, Poland, the first child of Olga and Wilhelm Schaffrick.  He was later joined by two brothers, Alex and Will, and three sisters, Irma, Edith and Alice.  His childhood was cut short by the horror of World War II.  The end of the war found him alone in Germany at the age of 17.  In 1946, he was reunited with his family in Pillenbruck, West Germany, where he worked on a farm until immigrating to Canada in 1949.  In Canada, he met his wife-to-be, Amelia Mentz, in 1952 and they were married 1954.  For the first several years of their married life, they traveled around Western Canada following Ron’s work in the oil patch and raising their daughters – Lili, Ingrid and Karen.  In 1962, they settled in Edmonton to be close to family.  His career took the family to Drummondville, Quebec in 1971 and then to Calgary in 1972.  Upon Ron’s retirement in 1986, they moved to Kelowna.

Ron worked in the oil patch for over 30 years.  He started as a roughneck for Regent Drilling and worked his way up to Drilling Superintendent Plains for Shell Oil.  Even though the job took him away from his home and family, Ron loved drilling for oil.   He liked the intellectual challenge, being in charge of a large operation and the camaraderie of the crew.  His work took him all over Alberta, Saskatchewan, Manitoba, Quebec, and the Canadian Arctic.

Opa had a zest for a life.  He enjoyed eating out, gardening, dancing, hiking, skiing, golfing and volunteering at his church.  He was always happy to organize a party or host a lunch.  His family enjoyed the many trips to Mexico and Harrison Hot Springs, and the anniversary and birthday parties that he planned.

Reinhard will be missed by his daughters and son-in-laws Lili and Dennis Taylor, Ingrid and Dennis Howden and Karen and Cliff Knitter; his grandchildren Judson Taylor, Susi and Ben Viguerie, Carla Howden and Matt Templeton, Chris Howden and Lia Sousa, Jonathan Knitter and Olivia Schmoe, and Julia Knitter and Nick Bennett; his great grandchildren Noah and Benny; his sisters Irma Zittlau and Edith Jonas and his brother, Will Schaffrick; and many nieces and nephews.  He was a loving husband and father, a kind and generous grandfather and always, without fail, a gentleman.

Donations in memory of Reinhard may be made to Christ Lutheran Church, Kelowna, B. C.


The service for SCHAFFRICK, Reinhard is scheduled for Monday June 24, 2019 at 10:00 am . Below you will find the map for the service location and the contact information should you have any questions.