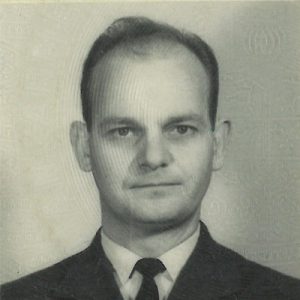 Ed passed away on November 24, 2019 at the age of 86, at the ICU (A) of Kelowna General Hospital.  He was predeceased by his father and mother, as well as his brother John.  Ed has left behind his wife of 56 years, Elizabeth “Katie”; son Steve; daughter Heather (David); granddaughters Isabelle and Scarlette; brother Bob; sister Edith; sisters-in-law Evelyn, Joan ​and Ellen; as well as many nephews, nieces and friends who are scattered all over the world.

Ed joined the Royal Canadian Air Force, at age 18, where he worked on aircraft electrical systems before retiring after 20+ years.  He then worked for Conair Aviation for another 25 years before retiring again. He was well liked with an infectious personality who enjoyed many friendships over the years. Ed and Elizabeth did a lot of touring over the years and enjoyed every minute of it. It was a lot of fun meeting new friends and visiting/living in such interesting countries. Ed got bladder cancer in 2012, had a rough time with the chemo and radiation treatment but got thru it and last week finished a 7-year annual check-up for the cancer with the Urologist declaring him cancer free and in very good health. Other than that bad stretch, he enjoyed a very healthy life. The last several years he was content to stay home and go “out and about” as he said he’d had enough travelling!

We loved him dearly and will miss him and his quick humor and guidance.

It was Ed’s wish that there wouldn’t be any service and that he be cremated. In lieu of flowers, the family would appreciate anyone wishing to do so to donate to the Kelowna General Hospital – Emergency and ICU (A),  www.kghfoundation.com, in appreciation of the fantastic teams of doctors, nurses​, paramedics, firemen and support staff. They are an incredibly dedicated and caring group of professionals.  The family thanks them with all our hearts.