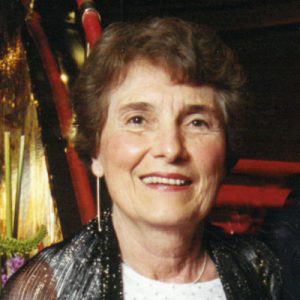 Surrounded by family, in Kelowna, in her 88th year, Eleanora passed away peacefully on October 5. She was born on June 26, 1930 in Qu’Appelle, SK, daughter of Casper Fettig and Frances LeBoldus. She grew up on a farm in Grassy Lake, AB, obtained a Diploma in Nursing and landed a position in Lethbridge, where she married Norman Cullen. The sudden death of Norman in 1972 in Cranbrook BC, where the family had moved, left Eleanora, at age 41, the sole bread winner and parent to raise their seven children. Fortunately, Eleanora held a position as department head at the new Cranbrook Hospital. Several years later she met Larrie Tetz, with whom she enjoyed 25 years of marriage. They moved to Kelowna in 2010 to be closer to her family only to lose Larrie to ALS in 2011.

Eleanora’s was an extraordinary life. Along with her striking beauty, she possessed a singular personality. Her willpower, energy, wisdom, and goodness not only prevailed through the difficult years of childrearing during widowhood, but also served as a blueprint from which her children and grandchildren continue to draw inspiration. She was also an excellent singer, cook, cribbage player, raconteur, and walker. She loved travel and the outdoors, but nothing trumped her love of family. Eleanora is predeceased by her brother Martin Fettig, sisters Mae Heintz and Anna Rushford, and her husbands, Norman Cullen and Larrie Tetz. She is survived by her seven children: Kathleen (Garth Walton), Burke (Irene Kanurkus), Tom (Cindy Cullen), Maureen (Mike Anderson), Jacalyn (Terry Kirkham), John (Orla Graham-Cullen), and Barry; three step children: Becky, Shelley, and Simone (Alessandro); 16 grandchildren: Jesse, Michael, Lauren, Ethan, Kieran, Dallas, Kelsey, Ryan, Scott, Blake, Lyndsay, Ailish, Tiernan, Saoirse, Abby and Drake; 2 great-grandchildren: Andre and Jackson; and many nieces, nephews, and friends.

Thank you to the excellent staff on 4A at Kelowna General Hospital and to the wonderful people – neighbours and staff at Sandalwood Resort, where Eleanora resided.

A Funeral Mass to be held at 11:00 am on October 20 at St. Charles Garnier Catholic Church, 3665 Benvoulin Rd., Kelowna, BC. Reception to follow at Kelowna Springs Golf Course at 360 Penno Rd., Kelowna BC. A Celebration of Eleanora’s life will be held in late spring in Cranbook, BC – details to come.

In memory of Eleanora, donations can be made to the KGH (Kelowna General Hospital) Foundation, www.kghfoundation.com. If you wish to send a condolence, post photos or share a memory, please scroll down the page to the area called “Share Your Condolences.”

Service
Saturday, October 20, 2018 at 11:00 am followed by a reception at Kelowna Springs Golf Course. An additional celebration of life will be held at a later date in Cranbrook, BC

Send Condolences
Send Flowers or a Sympathy Card
In memory of Eleanora, donations can be made to the KGH (Kelowna General Hospital) Foundation. Link: www.kghfoundation.com


The service for TETZ (Cullen) (nee Fettig), Eleanora Margaret is scheduled for Saturday, October 20, 2018 at 11:00 am followed by a reception at Kelowna Springs Golf Course. An additional celebration of life will be held at a later date in Cranbrook, BC. Below you will find the map for the service location and the contact information should you have any questions.