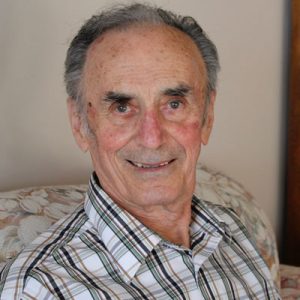 It is with great sadness that we announce the passage of our beloved husband, father and grandfather, George (Djuro) Udzenija, who went to be with the Lord on June 8, 2018 at the age of 86.  Survived by his wife Boza; daughter Nicole; sons: Justin and Peter (Brittany); grandchildren: Christopher and Jack.  He left behind a rich legacy of friendship and love.  A man of strong faith, he cared deeply for his wife, family and community, both here and abroad.  As a newcomer to Canada, he quickly established deep roots in Calgary and as one of the early presidents of the Croatian Club, he developed friendships that last to this day.  George was a resident of Kelowna for over 45 years and left his mark through the many homes that he built as the head of Lakeline Contractors.  As a Deacon at Lakeview Heights Baptist Church, his efforts provided support to those in need.  He also worked with organizations such as Freedom’s Door.  George never forgot his roots and was not only proud to introduce many to the beauty of Croatia, but also spearheaded relief efforts for those affected by the war in Croatia during the 1990’s.  A celebration of George’s life will be held on Thursday, June 14th at 11:00 am at the First Lutheran Church, 4091 Lakeshore Road, Kelowna, BC, with Pastor Keith Reisdorf officiating.  In lieu of flowers, donations may be made to Freedom’s Door, 1279 Centennial Crescent, Kelowna, BC, V1Y 6K3 www.freedomsdoorkelowna,com; Gideons Bible Society, PO Box 3619, Guelph, Ontario, N1H 7A2 www.gideons.ca; or a charity of your choice.  If you wish to send a condolence, post photos, or to share a memory, please scroll down this page to the area called “share your condolences.”


The service for UDZENIJA, George (Djuro) is scheduled for Thursday, June 14th at 11:00 am. Below you will find the map for the service location and the contact information should you have any questions.