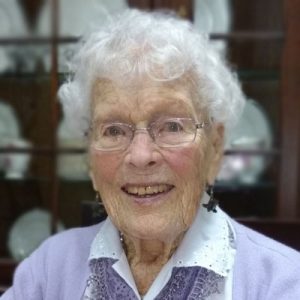 It is with great sadness that the family of Elsie Wilson announces her passing on December 21, 2018 at the age of 100 years. She was born at Surf Inlet in Northern BC as Elsie Leighton Sager, October 29, 1918. Educated as a teacher in Victoria, BC, she began her connection with the Okanagan in 1939 teaching in Summerland. Elsie married Les Wilson on February 12, 1942 and, after the Second World War, they settled in Kelowna, BC to raise seven children, along with numerous horses, dogs and cats. Her involvement in the Kelowna Riding Club, as a ski instructor at Big White and being the matriarch of a huge adoring family were her most cherished memories.

She was predeceased by her loving husband, Les Wilson, her son Murray, her sister Shirley Morrison and her brothers Arthur and Murray Sager. She is survived by her brothers Melvin and Henry Sager, daughters Noreen Schmidt and Loraine Kemp, her sons David, Donald, Michael and Peter Wilson, as well as 18 grandchildren and 11 great grandchildren.

Heartfelt thanks to the staff of Hawthorn Park and Orchard Manor for the exceptional and compassionate care, as well as a special thanks to Drs. McIntosh, Allardyce and Lichtenstein for the excellent medical care.

A public celebration of life will be held Sunday, May 19, 2019 at 1:00 pm at Springfield Funeral Home, 2020 Springfield Road, Kelowna, BC. In lieu of flowers, donations can be made to the Kelowna Riding Club, www.kelownaridingclub.com, the SPCA, www.spca.bc.ca, or a charity of your choiceIf you wish to send a condolence, post photos or share a memory, please scroll down the page to the area called “Share Your Condolences.”

Send Condolences
Send Flowers or a Sympathy Card
In lieu of flowers, donations can be made to the Kelowna Riding Club, the SPCA or a charity of your choice Link: www.kelownaridingclub.com, www.spca.bc.ca


The service for WILSON, Elsie is scheduled for Sunday, May 19, 2019 at 1:00 pm. Below you will find the map for the service location and the contact information should you have any questions.