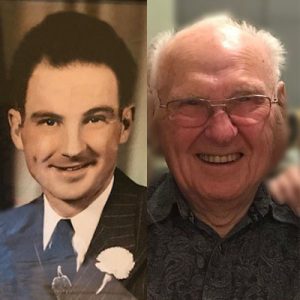 Dad was born in Torquay, Saskatchewan, the fourth in a family of twelve, and grew up in a rural community.  After being discharged from the army, he worked at various jobs and met and married our Mom, Pauline Peterson in 1949. They farmed for 11 years north of Midale, Saskatchewan, followed by a brief stint in Russell, Manitoba where they owned and operated a hardware business before settling in Kelowna – “home” for the past 58 years.  Always self-employed, Mom and Dad began life in the tourist industry purchasing a motel/grocery store/gas bar.  After six years they sold the store and opened a dry-cleaning business – Courtesy Cleaners. In 1981 they sold it.  John then worked part-time at various places, including ten years scaling gravel trucks where he enjoyed the comradery of “the boys”! Dad and Mom were married 67 years and so loved their five grandchildren, making many trips back to Saskatchewan. No one liked to drive more than Papa – sometimes 16 hours at a time –– arriving at Brian and Donna’s in Weyburn with a trunk FULL OF APPLES – time and time again!  Coffee with the boys at McDonalds and afternoons at the mall occupied his days in his later years.  Dad had a keen eye for horses and loved ponies, which contributed to OUR own life-long passion for horses.  Motorbike riding was also a fun and sometimes challenging pastime for our parents. In the 60’s, Dad bowled with friends.  Dad and Mom moved into the Retirement Community of Fernbrae Manor in 2014. We would like to thank cousin Michael Winter for his many hours of playing crib with Dad after Mom’s passing. Thanks also to the staff at Fernbrae for their attention and care. To Shirley Faulkner and her family – thank you for being so kind and supportive to our Dad.

We will miss you dearly Papa!

A Celebration of John’s life will be held at a later date, to be announced.