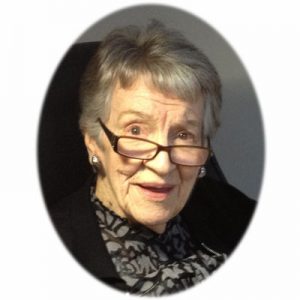 Nancy was born in Vancouver, BC to Charles and Violet Bruce, Canadians from Scotland. Older brother Charlie (now deceased) and Nancy enjoyed strong debates with their father who valued well-constructed “discussion – not argument.” Having learned to “carve each word from the air,” Nancy thrived in the UBC Players Club, starring as Elizabeth in Pride and Prejudice and other productions that toured BC. After her UBC degree in English, Nancy trained at Normal School as a teacher. She taught high school in Oliver, BC where she met John Woodworth. They corresponded through his World War II service as an Air Force pilot. Nancy returned to Vancouver for her mother’s final illness and worked as a CBC Radio actress and writer. Her parents died within six months of each other while her brother was still serving overseas as an Air Force navigator.

In June 1946, Nancy married John Woodworth. Their daughters Robin and Carol were born in Vancouver, BC where John graduated from UBC Architecture School. In 1954, John persuaded Nancy to move their young family to Kelowna, BC. Nancy helped John in his architecture firm, choosing colours for many local buildings. She wrote CBC radio plays, the Sultan of Simul-Ka-Meen pageant for the Kelowna Regatta, Christmas pantomimes and funny skits for the University Womens’ club. After raising her family, Nancy taught English at the new Okanagan College. She helped build community organizations. The many friends Nancy and John gathered around them have enriched all our lives. After John’s death in 2012, Nancy continued to live in their peaceful home above the lake with help from a remarkable care team we thank again here.

At 2 p.m. April 20, 2019, Nancy’s Celebration of Life will be held at Springfield Funeral Home, 2020 Springfield Road, Kelowna, BC. In lieu of flowers, please donate to the Central Okanagan Community Foodbank, www.cofoodbank.com. If you wish to send a condolence, post photos or share a memory, please scroll down the page to the area called “Share Your Condolences.”


The service for WOODWORTH, Nancy is scheduled for Saturday, April 20, 2019 at 2:00 pm. Below you will find the map for the service location and the contact information should you have any questions.