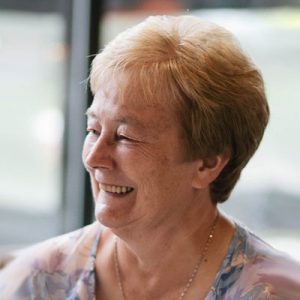 Marlene passed away peacefully on the February 16, 2019 after her battle with cancer. She is survived by her loving husband of 52 years, Philip; sister Jenny Locke; daughter Sarah (Colin, Caleb, Zachary) Winkler; and sons Alastair (Bethany, Natalia, Emma, Nigel) Woolcock and Nathan (Jennie) Woolcock.

A native of Royal Tunbridge Wells, England, she married Philip in 1967. Shortly after the wedding they embarked on a three-and-a-half-year adventure in Canada. Subsequently returning to England they settled down in Tunbridge Wells and started a family where their first child Sarah was born, followed by their son Alastair. Canada called though, and several years later Marlene and family embarked across the Atlantic aboard a transatlantic ocean liner, and then a train, to Calgary, AB, home of Marlene’s much-loved Rocky Mountains.  It was here that their third child, Nathan, was born. As opportunities presented themselves, Marlene and family moved to Victoria, BC for the next decade, then finally, to Kelowna, BC.

Marlene had a profound sense of adventure and a love of travel. These passions saw Marlene and Philip explore Europe from east to west and North America from sea to shining sea. Marlene and Philip continued to travel with their children domestically and abroad instilling the same spirit of exploration. Marlene was known for her dedication and support of her family, believing that the foundation of a close family was sitting around the table eating family dinner or playing a board game or two. Her love of the outside world was never far from her heart, enjoying drives to the mountains to spot a wild bear, moose or elk and exploring a run-down barn or mining town when she could find one.

Her family would like to thank the medical staff at the Kelowna Cancer Clinic for their ongoing care and the Kelowna General Hospital for all their compassion and care for Marlene in her final days.

A Memorial Service will be held on Monday, February 25, 2019 at 1:00 pm at Springfield Funeral Home, 2020 Springfield Road, Kelowna.  In lieu of flowers, memorial donations may be made to the BC Cancer Foundation, www.bccancerfoundation.com.

Send Condolences
Send Flowers or a Sympathy Card
In lieu of flowers, memorial donations may be made to the BC Cancer Foundation Link: www.bccancerfoundation.com


The service for WOOLCOCK, Marlene is scheduled for Monday, February 25, 2019 at 1:00 pm. Below you will find the map for the service location and the contact information should you have any questions.