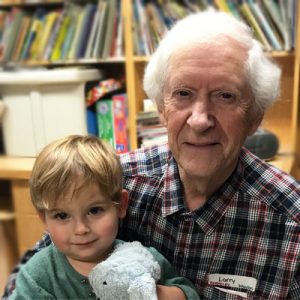 With immense sadness and disbelief, the family of Larry Worobetz announce his passing in Kelowna, BC on Friday, December 7, 2018 at the age of 77 years.  He is survived by his loving wife of 50 years, Ruth, and their daughters Tara Worobetz (Kevin Burbank), Tricia Wojcichowsky (Mike), Jennifer Taylor (Ryan) and Jessica Heppner (Darren), ten grandchildren: Nyah and Quinn Taylor, Spencer and Matthew Wojcichowsky, Rylin, Avery, Berkeley and Waylon Heppner and Austin and Eliot Burbank, his sister Sylvia Mierzewski and her family and his brother Melvin Worobetz and his family.  He is predeceased by his parents John and Polly Worobetz.

Larry was born in Fairview, AB on May 25th, 1941, and spent his early years in Hines Creek.  Leaving home at the age of 18, he served in the Air Force for 10 years, working as an air traffic controller.  He was stationed in Goose Bay, Labrador, Gimli, Manitoba and Namao, Alberta. During his time in Labrador, Larry took flying lessons and became licensed to fly small aircraft. A lot of time during these years was spent curling and riding his motorbike. His next 2 years were spent working as an air traffic controller for the Dept. of Transport, after which he left to resume his education.  He graduated from the University of Alberta, and embarked on a career in Corrections, first with Probation (Provincial Govt.) and after a year, moving on to the Federal Govt. as a Parole Officer, where he remained until retirement.  For a time, he acted as the liaison between the Parole office and the Edmonton City Police Dept.

In his “spare” time, Larry was a builder, adding on to the back of our house, as well as putting a garage on the front, and adding windows, a deck, and brick patio, and later doing renovations.  There were few things that he couldn’t fix.  His other passion was gardening.  Winters were spent planning next summer’s flower beds.  He had a special bond with each of our pets.  Our last dog, Molly, was very demanding about her walks, and left him with a well-established walking habit, rain or shine.

When the girls were home, much time was spent driving to, and attending many activities, and in the case of Ringette and ball, helping to coach.  During this time, we started the tradition of gathering as a family at Shuswap each summer.  His vast stores of patience showed as he circled the lake endlessly until each daughter was confident wake boarding.  It gave him great joy to continue this tradition with the girls now bringing their own families to the lake.

As grandchildren arrived, there were frequent visits to Calgary, Kelowna, and even to Scotland, where two of them were born.  He always loaded some tools in the trunk, as there were usually some handyman requests during these visits. Larry’s last week was spent playing cars and enjoying lots of snuggles with his toddler grandsons Berkeley and Waylon.


The service for WOROBETZ, Lawrence “Larry” is scheduled for Saturday, February 2, 2019 at 11:00 am at Sherwood Park United Church. Below you will find the map for the service location and the contact information should you have any questions.