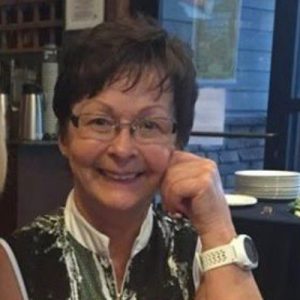 It is with heavy hearts that we announce the passing of Marjorie Rose Wood, better known as “Marj”. Marj passed away peacefully on May 12th, 2020 at Kelowna General Hospital at the age of 74 after a short but courageous battle with metastatic breast cancer.

Marj was born in Humboldt, Saskatchewan on September 14th, 1945. She moved to Edmonton in 1966 and shortly after to Kelowna in 1977. Marj worked as an events coordinator at Edmonton’s Convention Inn South and Kelowna’s Eldorado Hotel from 1966 to 1984, then worked in multiple roles at RBC from 1984 to 1994. She married Don Wood on February 21st, 1991, and shortly after joined Don to operate Wood Communications.

After successfully running Wood Communications for 13 years, Marj & Don looked forward to spending their retirement travelling, golfing, and enjoying time with family & friends. Marj was always interested in her family history and researched it intensely for years, creating a very deeply rooted family tree. Marj’s extensive research brought her to Europe in 2007 to meet distant relatives and retrace her ancestors’ footsteps, as well as back to her hometown in 2012 where she helped organize an approximately 600-person family reunion.

Marj was full of quick wit, an infectious laugh, a caring heart, and a talent for hosting fabulous gatherings. Marj will be remembered for cheering at her grandkids’ sports games, warm hugs, constant support, and of course, her infamous Shepherd’s pie and baked beans.

Marj’s family would like to give a special thanks to the compassionate staff at KGH.

There will be no service, by Marj’s request. There will be a celebration of life held at a later date. In lieu of flowers, and keeping in spirit with Marj’s volunteering and generous personality, please donate in her memory to the Foundry Kelowna, www.foundrybc.ca/kelowna, or to the BC Cancer Foundation, www.bccancerfoundation.com

Send Condolences
Send Flowers or a Sympathy Card
Foundry Kelowna or to the BC Cancer Foundation Link: www.foundrybc.ca/kelowna, www.bccancerfoundation.com