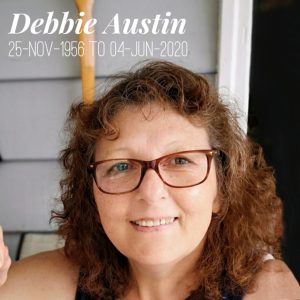 Debbie was born November 25, 1956, in Prince George, BC, and in 1973 moved to Kamloops and graduated from North Kamloops High School in1975.

In 1978, having moved back to Prince George, she met Wayne. In 1982, they moved to Mackenzie, BC where they owned first a restaurant and then a popular video store.

In 1998, they moved to Lake Country, BC, and opened Ma’s Grill in the old Greyhound Bus depot in Kelowna which they ran until 2011. Most recently Debbie worked for Interior Health.

Family and friends would all describe Debbie as a hard worker with a generous heart. Nieces, nephews, and friends of her children fondly describe Debbie as a “second mom”. She loved holidays and was the one who instilled the magic that made occasions such as Christmas time and Chinese New Year so special for her family and friends. Together with Wayne, they hosted many dinners and gatherings at their home. The meals were legendary among those who were lucky enough to attend. Debbie, hands down, made the best butter tarts ever!

A Celebration of Debbie’s Life will be held after the pandemic subsides when all her family and friends can gather together to remember her.