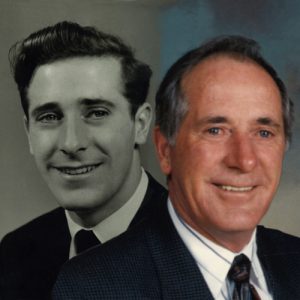 Mike’s life journey began as one of 13 children of the Curran family in Boho before the family moved to a row house on Church Road in Castlerea. Mike had dreams of a new beginning in Canada and in 1954, at the age of 21, he left from Cobh, Ireland by ship, with his younger sister Anne to meet his other sister Mary who had already settled in Vernon, BC. Papa tells the tale, as he arrived in Halifax Harbour he saw the sign “Drink Canada Dry” and in typical Papa fashion he teased, he’s been trying ever since. He settled in Vernon working with his brother-in-law Frank Podanowski logging with horses, which became his lifelong career and passion.

Mike met Helen Stremel in 1956 on a blind date set up by friends. It was within a few months that the crazy Irishman and Helen were engaged to be married. On September 7, 1957, Mike married his true love, Helen. Mike and Helen moved to Kelowna, BC in 1959 to be closer to Helen’s family after her father, George, died. At this time Mike had begun working with his brother-in-law Bill Schneider of Schneider Logging as a Heel Boom Loader Operator. In 1962, they found a home of their own and settled on 862 Walrod Street. This remained their family home for 42 years. George Thomas was born in 1962 and Patricia Anne followed in 1964. Many tales of back yard parties, friendly adventures, and Sunday night dinners took place at the Curran family home.

Mike was a very hard worker and awoke every morning at 4:30 am to begin his day in the bush. For many years he was a logger but soon became the lead hand and bush boss for Schneider Logging and later Duncan Logging. He was trained in first aid and his truck was a mobile unit, outfitted with welders and equipment to keep the machines running while in the bush. His knowledge and ability to lead made him a respected member of the forestry community and champion of the environment. Mike taught the next generation how to love the forest and the environment and was a guest instructor for years to the students of the RSS forestry program.

As the children aged, Mike was a devoted father and family man. He attended every event faithfully as a supporter and cheerleader, always with camera in hand. A true Irishman, Mike guided the children to love music as much as he did. Sunday mornings were filled with a hearty breakfast, listening to Irish music and attending mass at St. Pius X. Papa insisted the children learn to play an instrument and to this day George is wondering what 5-year-old chooses to play the accordion? Patty learned to play the classical guitar and sing which would turn into her passion and one of her careers. His love of music has transcended the generations, grandchildren, and great-grandchildren play and sing with his same enthusiasm.  Weekends were filled with volunteer activities, camping, fishing, dancing, bowling, and curling where Mike was always the leader, player, coach, driver, or fan.

Papa was selfless in his service to his family, his community, and church. Tens of thousands of eggs, burgers, and church functions sponsored by The Knights of Columbus saw Papa dawning an apron in front of a grill or BBQ. Mike proudly served as a Fourth Degree Knight and Grand Knight for many years acting as a support for those in need of a helping hand. Any weekend would see him helping people move, fundraising, deliveries of wood, or Christmas trees to church parishioners where Mike would share a beer and a visit. Mike was also instrumental in building the playground across from their Walrod home at Gordon Elementary as well as he played a major role in the origins of the Columbus Housing Society.

As another part of his community service, Mike was the first president of the Okanagan Irish Society. The group acted as a welcoming place to fellow Irish folk who had made their way to the valley. The group would gather and tell Irish tales, sing and dance, and always remember their roots. It was the one place where Irish accents and sayings were always understood.

As the years passed and the children grew and the grandchildren came, Nana and Papa were the core foundation of the Curran family. Papa, a true baby whisperer, was the ever-present, calm, loving, playful grandparent that could quell the tears of the most upset child, telling them they would be better before they were married. Each child felt special and loved by Nana and Papa as they had a huge role in their upbringing. In 2004, Mike and Helen shared a home with George and Sandra where he was an integral part of their family for the last 16 years. Together Mike and Helen raised and loved all of their grandchildren and great-grandchildren every day.

In 2017, Mike and Helen celebrated their 60th wedding anniversary surrounded by their family and friends. It is easy to see their loving influence on those closest to them. Each one of us is more Irish than we really are because of Papa’s way. He loved to gather and to celebrate family and friends and would relish in a chance to bring us together, have a beer and tell a tale. Mike’s humble way, selfless love and charm has graced us all. His genuine devotion to his family was his gift to us and we will cherish it forever.

An Irish Blessing
“He is not lost our dearest love,
Nor has he traveled far,
Just stepped inside home’s loveliest room
And left the door ajar”

A private family service will be held at Saint Pius X Catholic Church, Kelowna BC. Please join by Livestream (see below).

If anyone wishes to donate on behalf of Michael, please consider Society of St. Vincent de Paul and the Alzheimer’s Society.  www.ssvpokv.ca and alzheimer.ca

A special thanks to the nursing and medical staff at Kelowna General Hospital on 4A who took very good care of our Papa in his final days. A special thanks to Joyce and Sheila for their loving ways and all of the staff as they are a true blessing to those afflicted.