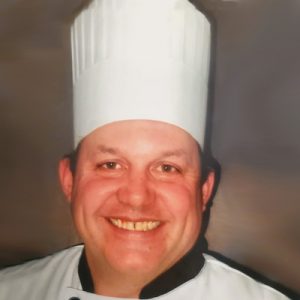 David was taken from us far too soon, on March 19, 2020 at the age of 56 he peacefully passed away surrounded by his family. He leaves behind his loving wife Kathy Harris and their two daughters Shannon and Sammy Harris; as well as his parents Gordon and Sheila Harris of Calgay, AB, and his siblings April (Tom) West of Calgary, AB and Keith (Angela) Harris of San Diego, CA.

Born on December 17, 1963 in Lachine, QC, David discovered his passion for cooking at a young age. He later pursued culinary school in Toronto, ON. 15 years ago, David’s culinary career brought him to Regency Retirement Resorts where he was a highly regarded Head Chef and beloved by coworkers and residents alike.

In 1987, he met the love of his life, Kathy, in Montreal, QC. They moved to Kelowna, BC and married in 1990. Over the past 28 years, they enjoyed family time with their two daughters: skiing, boating, camping, and travelling. He shares his adventurous spirit with Shannon and Sammy, evidenced by their Skydiving and bungee-jumping trips together. A loving father, son, and husband, he would do anything for his family.

David will be remembered for his quick smile, infectious sense of humour, and his fun-loving heart of gold. He will be greatly missed by everyone who knew him, and he will forever hold a special place in our hearts.

As per David’s request, there will be no service. Should family and friends desire, memorial donations may be made to the BC Cancer Foundation, www.bccancer.bc.ca.