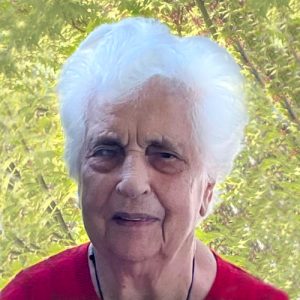 It is with heavy hearts that the family of Maria de Jesus Machado announces her passing.

Mom was born in Corregacho, Malhadal, Portugal, and lived there until she moved to Évora, Portugal. It was in Évora that she met and married Antonio Machado who was posted in the city while completing his military service.

Mom and Dad moved to India when Dad was posted there and that is where their first daughter Rosa was born. Three short months later Mom and Rosa had to return to Portugal without Dad due to the conflict for independence. They moved to Talhinhas to live with Dad’s family until his return to Portugal several months later; shortly thereafter the growing family moved to Mozambique where he was posted as a customs officer.

Mom and Dad lost a daughter named Helena after arriving in Lourenco Marques, now known as Maputo. Two years later they had a third daughter Paula and after Dad was transferred to Beira they had two sons, Pedro and Carlos. Dad’s parents joined the family in Beira for a period of time where Mom cared for our grandmother until her passing shortly after Carlos was born.

About two years later the family moved once again this time to Zobue on the border with Malawi, where we lived for about four years before going to Portugal in December 1973 for an extended holiday. Due to the Carnation Revolution in April of 1974, only Dad returned to Mozambique in the fall of 1974. Mom and the kids moved to Mom’s home town and she ensured we adapted to a new environment that was very different from what we were used to – for example, there was no running water or electricity.

The loss of most of our personal belongings and assets in Mozambique was a deep blow to both our parents but together they built a new life for us all that for a time included living with Mom’s brother Manuel and his family who has also been forced to leave Angola. The family next moved to Termas de Monfortinho on the border with Spain and where the three oldest kids had to go to boarding school in another town as there was no school beyond grade 4 in the resort town. Very tough on all of us to adapt to being apart but especially tough for Mom – it helped that she still had Carlos at home. Eventually, Mom and Dad made the difficult decision to move the family to Canada to provide us with better opportunities.

This move was fraught with challenges – a new country, language, and culture…not an easy feat but Mom appeared to us mostly unflappable throughout this period of time. The move also reunited Mom with her sisters Belmira (Jack) and Carma (Xico), as well as their oldest brother Joe (Maria) and we benefited from getting to know them as well as our cousins.

Although Mom always felt hemmed in by the narrow Similkameen valley and did not love living in a rural area when she had lived most of her adult life in an urban setting, she made the best of it. Mom always encouraged us to reach for the stars even though she knew it would likely mean that we would move away.

After Mom and Dad retired from running an orchard with Rosa and Armindo, they moved to Keremeos where they lived until 2020. Moving to Kelowna was supposed to afford them the opportunity to have more family time however Covid-19 made their last two years difficult as it did for so many.

Mom was a loving mother and wife and became a wonderful Avó to Miguel, Karina, Ryan, Alex, Kevin, Diego, and Remy and eventually a very proud Bisavó to Linden, Lucas, Ava Lopes, Jackson, and Cristiano Cavanaugh.

Mom was a quiet but bright light who did not often voice her opinion publicly but she also had nerves of steel and was a loyal friend to those who were lucky enough to earn her trust over the years.

She was challenged by diabetes, the eventual almost complete loss of her sight, the onset of dementia, and a recent stroke, yet she remained our rock and was witty to the end even as she struggled to keep the “thread” straight.

Mom is predeceased by her parents; step-mother; in-laws; brothers Joe, and Manuel (Felizarda); sisters Belmira (Jack), and Carma; step-brothers Antonio, and Arturo; nephews Albino and Luis; and her beloved infant daughter Helena.
Mom will be sorely missed by us all but we are forever grateful to have had her love and support to guide us until now.

A Memorial Service will be held on Friday, July 15, 2022, at 1:00 pm, at Springfield Funeral Home, 2020 Springfield Road, Kelowna, BC. Reception to follow. If you are unable to attend in person, please join the family online by Livestream at the time of the service (see link below), or a recording will be made available to view shortly thereafter. In lieu of flowers, the family would appreciate donations made in Maria’s name to Diabetes Canada, www.diabetes.ca.

Condolences may be sent to the family by visiting www.springfieldfuneralhome.com (click the direct link below)

A Memorial Service will be held on Friday, July 15, 2022, at 1:00 pm, at Springfield Funeral Home, 2020 Springfield Road, Kelowna, BC. Reception to follow.  If you are unable to attend in person, please join the family online by Livestream at the time of the service (see below), or a recording will be made available to view shortly thereafter. In lieu of flowers, the family would appreciate donations made in Maria’s name to Diabetes Canada.


The service for MACHADO, Maria is scheduled for Friday, July 15, 2022, at 1:00 pm. Below you will find the map for the service location and the contact information should you have any questions.