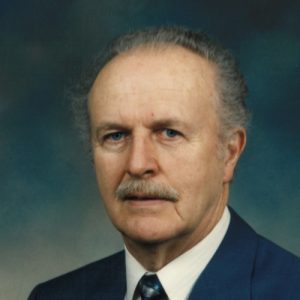 Herold Mueller, long-time resident of the Kelowna, BC area, passed away in the morning on Friday, August 19, 2022, surrounded by his family.

Herold Mueller was born on February 19, 1931, in Slobodarka, Poland, the second child to Adeline and Emil Mueller. In 1953, the family immigrated to Canada from northern Europe, and upon arriving in Canada they spent time in Manitoba working on a relative’s farm. Then, Herold made his way across Canada finally arriving in Vancouver, BC where he found work and completed a millwright apprenticeship. In 1956, still in Vancouver, he met his future wife Bertha, and they married in 1957. They had two children, Heidi and Harold. During this time in Vancouver, Herold explored an interest in music, and became self-taught in several instruments.

The family moved to Kelowna in 1970, where Herold continued as maintenance supervisor with the same company he worked for in Vancouver. Both in Vancouver and Kelowna, Herold was active in his church, where he continued to express his love for music by singing in church choirs and performing on the cello for some occasions.

In Kelowna, Herold enjoyed the sunshine and outdoor activities such as fishing. As time went on, Herold continued with his passion for music by starting to make violins, violas, and cellos as well as continuing to play the cello. After his retirement in 1991, he devoted more time to making these string instruments.

In addition to enjoying the outdoors and music, Herold loved to play chess. Earlier in his life, he was part of a chess club, and then later at family gatherings he loved to play with his grandchildren and their spouses where he almost always won. Chess games could last for hours.

The family would like to extend a thank-you to the staff at Kelowna General Hospital, and the Kelowna Hospice House, where Herold received wonderful care for the last few weeks of his life.

Memorial donations may be made to the Heart and Stroke Foundation of Canada.

A Memorial Service will be held on Tuesday, September 13, 2022, at 1:00 PM (PDT), at Springfield Funeral Home, 2020 Springfield Road, Kelowna, BC. A reception will follow. If you are unable to attend in person, please join the family online by Livestream at the time of the service (see below), a recording will be made available to view shortly thereafter.


The service for MUELLER, Herold is scheduled for Tuesday, September 13, 2022, at 1:00 PM (PDT). Below you will find the map for the service location and the contact information should you have any questions.