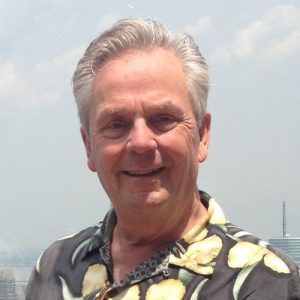 Sadly, E. L. “Ted” Park passed away on October 30, 2020, at the age of 77 in Kelowna, British Columbia after a short battle with pancreatic cancer.

Born in Saskatoon, Saskatchewan on May 15, 1943, Ted’s younger years were spent in Biggar, Saskatchewan before moving with his family to Spirit River, Alberta. Ted had the typical Canadian upbringing – playing hockey and baseball. He especially excelled in baseball and in his teens played for his team in the Little League World Series in Texas. After finishing grade 12, Ted went to SAIT to learn the insurance business and had a long, successful career as an insurance broker. In 1980, along with two partners, he started his own insurance brokerage firm in Edmonton, AB which still bears his name today, Foster Park Baskett. It is a lasting testament to a long and prosperous 37-year career. He retired to Kelowna in 2001 with his wife Marleen.

Ted met Marleen in 1994 and they were married in 1995.  They knew very quickly after becoming reacquainted that there was something special between them.  They enjoyed each other’s company immensely and were inseparable. They had 25 loving years together until Ted’s passing.

Ted and Marleen enjoyed spending as much time as they could with their family and many friends. In the years after retirement they travelled extensively. Some places include the Mediterranean, Mexico, New York City and many others. They also took several memorable cruises together. Other pastimes that Ted and Marleen enjoyed were golf, bowling, entertaining and long walks. It is hard to think that Ted is no longer with us to be able to continue doing the things he loved.

For anyone that knew Ted, they know just how kind he was. Ted seemed to always have a smile on his face. He could make anyone feel comfortable and welcome. It did not matter who you were, he could strike up a conversation and make anyone feel like a close personal friend. He had such a strong ability to bring people together.

There was nothing more important to Ted than his family. He always put them first never wanting anyone to fuss over him. He always just wanted to protect his family. He would be the one to try and make things right. It did not matter if it was because of injury, confrontation, fright, sadness or anything else; he just wanted his family to be healthy and happy.

Ted will be greatly missed by his family and friends. His was a life taken too soon. Everyone will miss his smiles and kindness. We all will cherish the wonderful memories that we have of Ted.

In lieu of flowers, donations can be made to the BC Cancer Society, bccancerfoundation.com

Due to Covid-19 restrictions the immediate family will have a private get together honouring Ted. A celebration of life will be planned for May 2021.