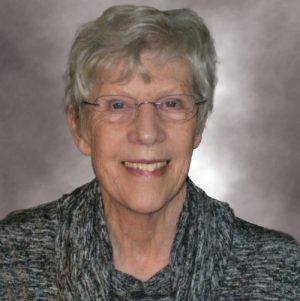 Janet trained as a nurse at the Queen Elizabeth School of Nursing in Birmingham England. After becoming a state registered nurse, she was awarded staff Nurse of the Year at the General Hospital of Birmingham. She worked as a ward sister at the Women’s Hospital and Dudley Road Hospital and met her husband Mike in his final year Birmingham Medical School, and they married in 1963.

In 1966, they immigrated to Canada with Helen who was 15 months old at the time. Mike worked in rural practices in Saskatchewan and Janet worked in the local hospitals and as the office nurse at times acting as the driver for the practice’s makeshift ambulance. Lots of hard work and adventure over this time. In 1974, Janet and Mike moved to Alberta for Mike to complete a residency in anesthesia. Janet again worked in medical offices all while raising a family.

1981 marked yet another move, this time to Kelowna where Janet took over the business side of the anesthesia practices until retirement.

Despite a series of serious medical conditions, she lived life to the fullest. Always willing to help to listen and lend a sympathetic ear.

She loved to travel in the early days and was a keen cyclist, bicycling all over Kelowna, San Juan, and Gulf Islands with Mike and friends.  Her final and best trip despite having two artificial hips was riding stages with Mike and friends Richard and Carole on the railway beds from Kelowna to Castlegar, BC.

She became an avid lawn bowler and competitor and served as president of the Kelowna Lawn Bowling Club on two occasions.

In the latter years, she and Mike wintered in Victoria and one delight was Sunday afternoon sessions of Dixieland style jazz at Hermann’s Jazz Club on View Street. Also, she was a longtime supporter of the Pentastic Jazz Festival in Penticton.

In later years, she was an example of dealing with serious disease demonstrating determination and fortitude, not giving in without a fight. She survived over 2 years following a diagnosis of pancreatic cancer.

The family would like to thank the family doctors who cared for her Dr. Barry Eliason, and Dr. Ron Gore and his wife Joan. Dr. Rao, the nurses and staff at the cancer clinic for their care and kindness, the palliative care teams, and the hospice staff for their support in the final days.

Please no flowers by request, and should you wish, donations can be made to the BC Cancer Agency Sindi Ahluwalia Hawkins Centre for the Southern Interior, www.bccancer.bc.ca

A Service and Celebration of Life will be held on Saturday, October 3, 2020 at 4:00 pm at Springfield Funeral Home, 2020 Springfield Rd, Kelowna, BC. Due to Covid-19 restrictions the number of attendees will be limited, if you wish to attend please click here to sign up. If you are unable to attend in person, please join the family online by Livestream (see below).

THIS SERVICE WILL BE LIVESTREAMED/BROADCAST ON SATURDAY, OCTOBER 3, 2020 AT 4:00 PM


The service for SMITH, Janet (née Fallowell) is scheduled for Saturday, October 3, 2020 at 4:00 pm. Below you will find the map for the service location and the contact information should you have any questions.