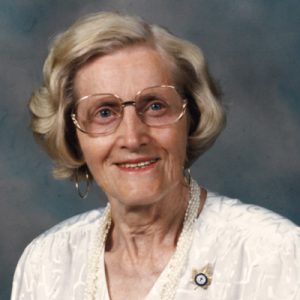 Born to Anton and Margareta (née Mardian) Materi on June 1, 1918 in Prelate, SK, she attended Gladwin School in the Prelate, SK district. Her childhood was typical for those days; she was expected to help with the chores: milk cows, make breakfast, wash dishes, and carry water from the well, all before going to school. She learned to bake bread when he was 13 years old.

Her mother passed away in 1937 and she went to work for Mrs. Fiset in Lancer for several years and for Mrs. Dr. Holmes in Eston and she also worked in the Rosetown Convent for several months. Later, she moved with the Fiset family to Gravelbourg where she worked for several years. In 1943, she went to Vancouver, BC to work for two years before returning to Regina, SK where she was employed with the Robert Simpson mail order store for years. Here she met Goldwin Weppler and they were married on April 23, 1960. They moved to Kelowna where they worked. While there she was active in the church (CWL). She moved to Kindersley for a short time to take care of her brother Steve who was diagnosed with cancer. After his passing in November 1988 she moved back to Kelowna where she has resided ever since. She enjoyed curling, golfing, playing bridge and making quilts in her spare time. She is survived by a sister Clara (née Materi) Dillman and several nieces and nephews. She was predeceased by her husband Goldwin Weppler; brothers Peter, Louis, Ferdinand, Leonard, and Steve; and sisters Katie and Cecelia.

In lieu of flowers, donations may be made to a charity of choice. If you wish to send a condolence, post photos or share a memory, please scroll down the page to the area called “Condolences”.