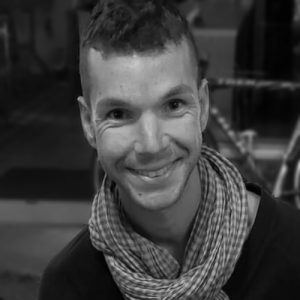 It is with heavy hearts that the family of Nicholas Witzke announce his passing after a courageous and inspiring 18-month journey with colorectal cancer. He left peacefully on the morning of April 29, 2021, at the age of 33, with his parents and two sisters at his side. Left to mourn this loss are his parents Kevin and Rita Witzke; sisters Karli Holy (Lukas) and Justine Powar (Mike); nephews Dante and Oscar; niece Simone; grandmothers Armerinda Russo and Dorothy Witzke; and many aunts, uncles, cousins, and friends. He was predeceased by his grandfathers, Jack Witzke (d. 2002), Amedeo Russo (d. 2010) and by his uncle, Joe Iafrancesco (d. 2018).

Nicholas was born in Kelowna, BC on March 25, 1988. He was an athlete most of his life, playing soccer as a child, skateboarding as a teenager, and cycling as a young adult. Cycling became Nic’s passion. He particularly enjoyed uphill climbing on his road bike, a true testament to his physical and mental strength and endurance.

Nicholas graduated from Okanagan College with a Degree of Business Administration in 2011 and pursued another one of his passions – coffee. He began at 49th Parallel Coffee Roasters in Vancouver; then went on to work for Phil & Sebastian Coffee Roasters as their west coast rep, in addition to being a founding partner of Enroute Coffee and Cycling Service Studio.

His passions for cycling and coffee gave him the opportunity to explore places like Guatemala, Panama, Italy, Columbia, and California.

After his diagnosis, Nicholas decided to chase a long-time dream of living in Italy and moved to the small town of Ortigia in Sicily. He spent the last 9 months there sipping espresso, cycling, jogging around the island, eating tomatoes, and sitting at the beach with friends. Perhaps, the greatest gifts from Sicily came from the cultural connection he experienced and the loving friendships he made.

Nicholas’ family would like to extend a huge thank-you to the doctors and nurses in Sicily, specifically the cancer clinic in Avola and the palliative home care team in Syracuse. In Kelowna, we are grateful to the doctors and nurses on 2 South at KGH who all provided outstanding care for Nic. There are too many to name, but you know who you are. Also, to our friends and family, we thank you for your unfailing love and support during these last 18 months.

In light of current Covid-19 restrictions, there will be no large funeral service at this time. In lieu of flowers, please consider donating to the BC Cancer Agency. Thank you.

Dear Rita, my deepest heartfelt condolences to you and Kevin and your whole family for the loss of your beautiful son. He taught me so much and made my life a whole lot better. I’m glad to have had the privilege of walking with him for an unfortunately all too short while. I’m sure we will walk a road together on a better day. Now I can only give you a long-distance hug and hope your grief will soon turn to strength and health. All my love. Tony…

In questi momenti non ci sono parole, ci uniamo al vostro dolore con il cuore gonfio di lacrime, lui un anima bella restera sempre nel nostro cuore e’stato un privilegio per noi conscerlo, fatevi forza avete fatto tutto quello che era possible per rendere l suoi giorni felici. Vi vogliamo bene. Francesca e Antonio. (Translation) In these moments there are no words, we join you in your pain with a heart swollen with tears, he is a beautiful soul who will always remain in our hearts it has been a privilege for us to know him, take strength you have done everything possible to make his happy days. We love you. – Francesca and Antonio.

Nicholas was not always part of the island, of this small village, but someone so special who came, left a big message about life, then disappeared. – Marcello

Mio caro Nicola… Dal paradiso leggerai di sicuro queste poche righe. Volevo che sapessi che il tuo coraggio e la tua speranza mi hanno dato tanto coraggio. Tu el la tua dolcissima mamma mi avete riempito il cuore di serenità, la vostra forza nell’affontare la terribile malattia che ti ha divorato sarà ricompensata dall’abbraccio che ora starai ricevendo dalla Vergine Maria in Paradiso dove ora tutto il dolore che hai patito si trasformerà in gioia. Tua mamma troverà la pace nel saperti ora felice. E io ti voglio e ti ho sempre volute un bene immense, ti ritroverò nell mie preghiera per te… -Padre Flavio (Translation): My dear Nicola… From heaven you will surely read these few lines. I wanted you to know that your courage and your hope have given me so much courage. You and your sweet mother have filled my heart with serenity, your strength in facing the terrible disease that has devoured you will be rewarded by the embrace that you are now receiving from the Virgin Mary in Heaven, where now all the pain you have suffered will turn into joy. Your mom will find peace in knowing you are happy now. And I want you to know that I have always loved you immensely, I will find you in my prayers for you… – Father Flavio